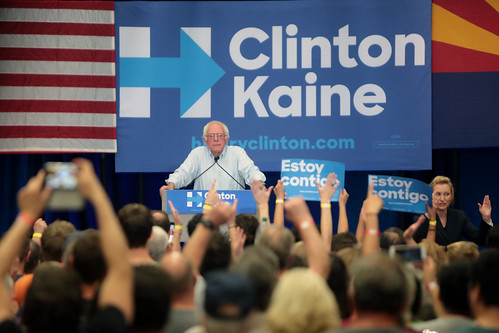 Bernie Sanders dropped out of the presidential race on April 8th, 2020. His campaign galvanized millions around a social democratic program of universal healthcare, free public higher education, a Green New Deal, and other important economic and social policies. While I always viewed his candidacy as possessing extreme limitations, a strategic choice was made to criticize Bernie Sanders only for making tragic missteps that impact the lives of millions of workers (for example, calling Venezuelan President Nicholas Maduro a "tyrant") while devoting extensive coverage of the DNC's war to stifle and destroy his popular campaign at every turn. The hope was that the conflict between the Democratic Party establishment and the Sanders-wing of the party would reach a critical mass at July's convention and break the Democratic Party into pieces. Bernie Sanders did have a large base of working-class support, especially among young people, to make this happen. His decision to bow out of the 2020 election represents a tragedy for many and a massive betrayal for others. What his exit from the race really calls for, however, is an earlier than expected reality-check for progressives and leftists in the United States.

Bernie Sanders never sought out to run a campaign that challenged the entrenched corporate interests at the head of the Democratic Party on the question of power. From 2016 onward, Bernie Sanders played within the bounds of the Democratic Party's formal and informal rules while touting a policy agenda that corporate Democrats refused to embrace. He was friendly with the corporate media and refused to utter a substantive counter offensive against his opponents. Bernie Sanders attempted to win "fair and square" within a rigged party apparatus and adopted bourgeois civility politics designed to destroy the very political trend that he represented. Instead of challenging the DNC's rigging of the 2016 primary, Sanders took a job as outreach chair for Senate Democrats. This time around, the self-proclaimed democratic socialist dropped out to endorse a candidate in Joe Biden who Sanders repeatedly called his "good friend" despite possessing a policy agenda completely antithetical to the former Vice President.

These sharp contradictions require a reality check for those who believed that the Democratic Party could ever be forced to accept a candidate that dedicated their campaign to the social welfare of the working-class majority. Bernie Sanders never expressed any interest in angering his establishment colleagues. Yet Nany Pelosi, Chuck Schumer, and the big corporate donors behind them were never going to embrace Bernie Sanders no matter how much he played nice and tried to energize support for the Democratic Party on their behalf. Sanders didn't want to overthrow Pelosi, Schumer, or Biden; he wanted to redeem them from their sordid path. He energized millions to embrace progressive politics, but not political power. The basis of his campaign was to share power with the corporate Democrats in the hopes that they would change their moral and political misgivings and eventually cede party leadership all together.

Such a scenario was never feasible. Some progressive outlets wanted Bernie Sanders to change his approach with the hopes that he could legitimately win within a hostile structure. The idea was that Sanders could appeal to moderates as the more "electable" and "centrist" candidate while escalating an attack on Joe Biden and his corporate opponents. But to criticize Joe Biden means opposing everything that the Democratic Party represents. It means making policies such as predatory lending, mass incarceration, privatization, and the like a fundamental aspect of the Democratic Party's identity. It also means letting go of the idea that the Democratic Party represents the interests of working people. To do so immediately alienates so-called moderates who are comfortable with the status quo and benefit from the Democratic Party's image as the so-called progressive option in the two-party duopoly.

The objective conditions within the Democratic Party were indeed unfavorable toward Bernie Sanders, but it could be argued that his own limitations are what ultimately killed his campaign. Bernie Sanders possessed a political base of millions of young people. This energetic section of the population could have been utilized to spread his campaign's message in concrete ways during the coronavirus pandemic. Instead, Bernie Sanders voted in favor of a multi-trillion-dollar corporate bailout that failed to provide any substantive relief for working people. Furthermore, Bernie Sanders' young and energetic base would have stood by him should he have mounted a critical campaign against Joe Biden. Joe Biden not only appears to be in cognitive decline, but there is no shortage of issues from which to expose him as a shill of the capitalist class. This would have required Bernie Sanders to criticize Joe Biden's record as Vice President of the United States under Barack Obama. And few in Bernie Sanders' political circle seemed willing to associate Barack Obama with the pro-corporate and pro-war policies that animated his presidency.

Bernie Sanders' campaign places a spotlight on the limitations of social democratic movements, especially within the political framework of U.S. imperialism. Russian revolutionary Vladimir Lenin possesses the most credible work on the subject. Lenin described the tendency for social-democratic movements not led by an organized working class to collaborate with imperialism and turn to opportunism in revolutionary moments. The Democratic Party apparatus is designed to stifle revolutionary politics and has never been friendly toward any manifestation of working-class struggle in the United States. Left-wing analysts who continue to plead for Bernie Sanders and the mass base behind him to walk in the footsteps of Franklin Delano Roosevelt and the New Deal forget that it took a massive amount of working class unrest to win economic reforms amid the Great Depression. They also forget that FDR placed Japanese Americans in concentration camps and was more interested in saving capitalism than anything else. Despite the presence of a significant number of workers and youth in its ranks, the movement to elect Bernie Sanders was confined to a corporate political structure wholly incapable of putting the working class in command.

Bernie Sanders ultimately had it backwards. To force the hand of the U.S. capitalist state, a mass movement of the working class must exist that is powerful enough to disrupt production. New Deal protections have been rolled back significantly since their implementation precisely because labor unions have largely chosen an inside-strategy of a permanent alliance with the Democrats over grassroots militancy. An inside-movement centered on developing insurgent political campaigns only dies when workers are not organized at the grassroots to make demands on the state. The intersection of COVID-19 and the crisis of U.S. capitalism have produced ripe conditions for Sanders' campaign to take the lead on mobilizing popular energy around key policies such as Medicare for All and universal paid sick leave. That Sanders and his campaign failed to take the risks necessary to make demands on the state in a period where working people are suffering more than ever demonstrates that the Democratic Party is a graveyard for social movements and Bernie Sanders is complicit in holding the gate to the graveyard open.

It is important to note that the upsurge of progressive sentiment around policies such as Medicare for All has been a good thing and that Bernie Sanders helped bring this sentiment to a national stage. The key lesson to take from this moment is that the actual struggle for socialism, just like all aspects of reality, is full of contradictions. Black Agenda Report's late co-founder and Managing Editor Bruce Dixon called Bernie Sanders a "sheepdog" for the Democratic Party. He wasn't wrong. But romanticizing Bernie Sanders or condemning him all together doesn't offer a way forward. If Bernie Sanders' presidential campaign teaches us anything, it is that our efforts must be redirected toward organizing working class people to unite on a grassroots basis and abandon the notion that the Democratic Party can be transformed into a vehicle for the working class if we just run the perfect campaign. As we say goodbye to Bernie Sanders as a political candidate, we should also be saying goodbye to the Democratic Party as a political vehicle, too.

Related Topic(s): Bernie Sanders; Bernie Sanders 2016 Presidential Candidate; Bernie Sanders Foreign Policy; Bernie Sanders Supporter, Add Tags
Add to My Group(s)
Go To Commenting
The views expressed herein are the sole responsibility of the author and do not necessarily reflect those of this website or its editors.