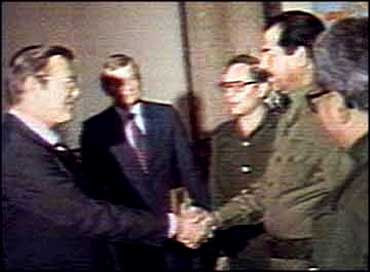 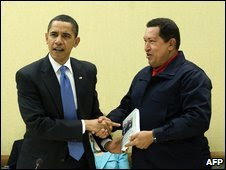 (Image by Unknown Owner)   Details   DMCA
The Republicans were apoplectic.

There he was: THE PRESIDENT OF THE UNITED STATES OF AMERICA - THE LEADER OF THE FREAKIN' FREE WORLD - disgracing the the martyred souls of the glorious dead who gave their "last full measure of devotion" for this grand and glorious land of ours. If they had not seen it on FOX Noise with their very own eyes, they would not have believed it to be possible. But true it was. Barack Obama had been caught red handed and in living color being gracious toward Venezuelan President Hugo Chavez.

It was very possible that all over the nation, these crazy, wing-nut geezers - some of them on the verge of a complete psychotic breakdown - might click on the April 23, 2009 edition of "The Rant" and nudge their poor wives in utter rage and disbelief:


"Did you see that, Margaret? Barack WHO-sein Obama shook the hand of YOU-go Chavez! Just take a good look at that picture picture up there on the left! And whaddaya know! Doesn't it just figure that Tommy "The Commie" Degan would plant that photo at the top Left corner of the article? He hates America, you know."

"Wait, Margaret! It gets worse! Barack WHO-sein Obama not only accepted a book from the dreadful little man, he actually smiled at him - AT YOU-GO CHAVEZ, for the love of Mike! Someone pass me my nitroglycerin pills!"

As I mentioned in the previous column (Is it pretentious to refer to these things as columns?), the GOP - and the far-right extremist kooks who pass as their spokespersons nowadays - are desperate for issues that will distract the American people. They are years past the point where they could talk about ideas. Why is this, you ask? Because their ideas suck, that's why. They are now attempting to do to Barack Obama what they did to Bill Clinton when he was president: Go after him with every thing including the kitchen sink.

Karl Rove was one hell of a role model for these idiots. They took the Rove playbook and they ran like hell with it - over the mountain, down into the valley and across the river. American politics is no longer about issues; it's not about ideas, and it's certainly no longer about We The People. It's all about insinuation and accusation - oh yeah; and money - lots and lots of money. Statesmanship and ideas have gone the way of the typewriter and the 8-Track tape.

When President Obama arrived home in Washington the other day, the Republican spin machine went into full-tilt, freak-out mode. "He's making nice with that evil dictator!", they shouted in unison. What was Obama supposed to do when Chavez approached him - punch him in the nose? Should he have performed a Moe Howard maneuver and poked him in both eyes with his middle and index fingers? How the hell would that have looked?

What on earth could the president have possibly done other than smile graciously and politely accept the book from Chavez? By now it is a given that the only kind of diplomacy the knuckleheads and neanderthals on the Far Right understand is the cowboy diplomacy that was practiced for eight long years by the Bush Mob - and look how much good that did us! Diplomatic negotiations are not - and have never been - about simple issues of black and white. It is all about shades of gray - and yet these people have never been able to figure out this simple fact that is understood by every Freshman Political Science student.

And if the reaction to the Chavez incident was not weird enough, they're now having a positive hissy fit because the Obama administration is now hinting that they want to normalize relations with Fidel Castro's Cuba. Oh, Heaven forfend!

A FEW WORDS ABOUT FIDEL CASTRO:

Ah, Fidel! The man we just love to hate! I don't like putting myself in the position of defending the guy, but in the Hall of Fame of evil, despotic tyrants, poor old Fidel is pretty low rent, don'cha think? The Cuban people do not live in constant, mortal fear of their government. A lot of them, maybe even most of them, may not care too much for Fidel or his brother Raul, but he is no better (or worse) than the man he ousted from power in 1959, America's faithful ally, Fulgencia Batista.

When Jack Kennedy imposed the Cuban embargo on February 3, 1962, I was not yet four years old-years-old. Barack Obama was one day shy of turning six months old. I turned fifty last August. Barack Obama is now president of the United States. The embargo has done neither country any good. It's time to end it.

Tom Degan is a former Green Party candidate for New York State Senate. He writes on a blogsite called, The Rant by Tom Degan. He is the recipient of the Presidential Medal of Freedom.....Okay, he didn't really receive the Presidential Medal of (more...)
Related Topic(s): Democracy; Democracy; Dictator Dictatorships; Diplomacy; Government; Hitler; Literacy; Murder; Peace; People; (more...) Policy; Stalin; State; Torture; Torture; Totalitarianism, Add Tags  (less...)
Add to My Group(s)
Go To Commenting
The views expressed herein are the sole responsibility of the author and do not necessarily reflect those of this website or its editors.