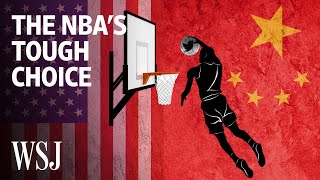 Backlash against the NBA sparked by a tweet in support of Hong Kong protesters shows how tricky it is to do business in China
(Image by YouTube, Channel: Wall Street Journal)   Details   DMCA

Let's get one thing straight. The Chinese people, whether they appear happy or sad, support their government because they're controlled. After generations of being beaten down, the population bows the head and bends the knee to slave masters. Call that freedom if you want to.

And if you really believe the situation in America is no better than the system in China, even with the amount of censorship alive and well in America, even with the rigging of this economy, try an experiment. Move to China and start publishing articles relentlessly critical of the government there. See what happens. Be sure to leave a copy of your last Will and Testament at home.

When the NBA commissioner and several players talk about loving their Chinese fans, they're referring to victims of long-term terrorism. And if you press the NBA people on that point, they say, "We just want to play basketball, we just want the games."

And they want the money. The Nike money, the Chinese money, the television money, the other merchandise money. More Chinese people than Americans watch the NBA playoffs on TV.

When, in a momentary fit of sanity, the General Manager of the Houston Rockets, Daryl Morey, retweeted FIGHT FOR FREEDOM, STAND WITH HONG KONG, the Chinese government launched a sh*t storm. Blacked out pre-season games, canceled press conferences, attacked NBA Commissioner Adam Silver for (partially and weakly) defending free speech. Now, calls are going out for Daryl Morey to resign from his job, to appease the Chinese government.

The big fear? A few global NBA stars would decide to step up and defend the million Hong Kong protesters, who want to knock down a bill that would allow China to extradite "criminal suspects" from Hong Kong to the mainland, where they can be charged, imprisoned, tortured, murdered. Those number one Hong Kong suspects would be persons who oppose the mainland Chinese regime.

The NBA stars, speaking out, could ignite a worldwide conflagration of public outrage aimed at the brutal government of China.

So far, that fear is unfounded. Social justice warriors LeBron James, (coaches) Steve Kerr and Gregg Popovich are silent on the specific issue of Hong Kong vs. China. No one connected to the NBA is addressing it.

We have what George Washington warned about: an entangling foreign alliance. The US, China, money.

You have to wonder at the curious timing of all this now. The Chinese government, seizing on one little tweet, blows sky high, just when NBA players, coaches, and the commissioner happen to be in China on a good will money-pumping tour. It's as if the Chinese government wanted an excuse to attack the US, because Trump has been stirring the pot on US-China trade relations. Obliquely, the Communist dictatorship wants to demonstrate how far they'll go to crack down against any outside criticism, and against readjustment of trade that currently favors China. Grossly favors China. (We'll see just how good or bad the new Trump trade deal with China is.)

Who is in charge of keeping NBA players in a state of silence and compliance with the wishes of the Chinese leadership? The NBA, yes. But more importantly, the shoe companies. Nike, Adidas. They have enormous business in China. Mustn't disturb THAT. Every famous NBA player has a big $$ shoe deal. Mustn't endanger THAT money, either. So shut up. Play ball. Stay ignorant of politics.

The Chinese leadership is, in effect, daring the NBA to cut ties with China and lose billions. "If your balls are made of money, we have you by the balls."

Related Topic(s): Basketball; Censorship; China; China Politics; China-US Agreement; Freedom; Globalism; Speech, Add Tags
Add to My Group(s)
Go To Commenting
The views expressed herein are the sole responsibility of the author and do not necessarily reflect those of this website or its editors.