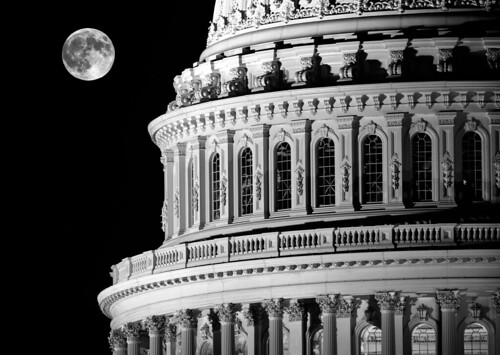 The hyperventilating over Wednesday's MAGA cosplay in the Capitol Building continues:

In a blistering speech one day after pro-trump supporters stormed the U.S. Capitol in an unprecedented security breach, U.S. President-elect Joe Biden said the perpetrators should be considered 'domestic terrorists'.

"Don't dare call them protesters. They were a riotous mob. Insurrectionists. Domestic terrorists. It's that basic. It's that simple."

That the incoming president declares a number of activist from the opposing party to be 'terrorists' demonstrates how unqualified he is for that job.

Is this a terrorist?

Those rabbles were in no way terrorists. They were not even a mob. Most of them were out-of-town rednecks who felt that they had been wronged. They wanted to express that. They were surprised when they found how easy it was to enter the Capitol and they apparently took more time to take pictures than to rearrange the furniture.

This was not a coup attempt either. These folks had no weapons, no training and, most importantly, they had no plan of what to do except to maybe enter to then leave:

And yet, and yet". This was no Vietnam-level rioting. This wasn't even a serious occupation, which one would think was the point, to keep Congress from executing the final ratification of the Biden win. Could you image the spectacle of democracy chastened if the Trump mob had held the Capitol and forced Congress to scramble find a hotel ballroom in which to finish their official business?

Nope, Congress was back in business by 8:00 PM, roughly seven hours after the barbarians stormed the walls, albeit with pretty much everyone badly rattled and some Trump supporters rapidly backpedaling from their former positions.

Despite the gravity of the event, if you look not very hard at what happened, both sides in their different ways were shambolic.

[L]et's be clear about what did not take place at the Capitol Building last night. This was not a fascist coup, as so many shrill, supposedly liberal commentators are claiming. Their flagrant use of the word 'fascist' to describe every political movement they disapprove of is an insult to reason and history. This wasn't a coup full stop. The National Guard suppressed the morons, the barricades were put back up, and even their hero Donald Trump told them to go home. A coup is a conscious effort to illegally seize power from the government. These people couldn't even believe they made it into the Capitol Building. They were like children finding a candy store unguarded.

There was also a curious lack of resistance from the relevant authority:

[Rep. Anna] Eshoo also blasted the Capitol Hill police, calling their lackluster response a "failure across the board" and describing the barricades outside the Capitol complex "like doggy doors " it was like, 'Welcome, I'm taking you on a tour.' "

Lawmakers, she said, had gotten a detailed memo about street barricades and procedures, but when she arrived and looked across the Capitol Hill plaza, "I thought, where is everyone?"

These were not terrorists but tourists who came from all over the states to Washington for fun and to register their disagreement with the 'elites'. The Capitol Hill policeman correctly recognized that the protesters were not enemies of the state but rather normal Americans:

Maggie Haberman @maggieNYT - 4:16 UTC · Jan 8, 2021
Cops gave rioters directions to Schumer's office but aimed a gun at a photographer and didn't believe she was a journalist. Astonishing this is the level of security in the halls of a co-equal branch of government in the post-9/11 era.

Yet Biden and others are furious about the stunt because it lifted the veil off their vaunted U.S. 'democracy' and its empty rituals:

Moon Of Alabama was opened as an independent, open forum for members of the Whiskey Bar community.  Moon of Alabama's purpose is to discuss politics, economics, philosophy and blogger Billmon's Whiskey (more...)
Related Topic(s): Biden Harris; Capitol Evacuation; Capitol Riot, Add Tags
Add to My Group(s)
Go To Commenting
The views expressed herein are the sole responsibility of the author and do not necessarily reflect those of this website or its editors.