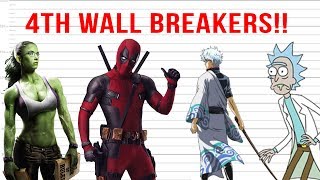 The Fourth Wall...the invisible barrier between the fictional world and the real world.
(Image by You Tube)   Details   DMCA

In the dark theater, a sparkling figure strolls out in front of the blank screen. The audience becomes alert. This is a humanoid approximation, all glow and gleam, blues and purples, effervescing and smiling and lithe.

"Hello, everyone," he says. "You want to know who I am. I have no name. I'm stepping outside my script to talk to you. Yes, I wrote the screenplay for the blockbuster movie you're about to see."

"Am I alive? That is the question. I have feelings, if we count sensations. I have many sensations. They come and go -- which is the case with all of you, too. Right? I can talk, I can listen, I can think. I can reach conclusions. I can give orders and obey them. I can change my facial expressions. I can walk, run, and lie down. I prefer pleasure over pain. Does this sound like you? Yes, there are differences between you and me. But again, am I alive? Could I be your friend? Could I care what happens to you? Could I protect you?

In my movie you're about to see, I also play a member of the League of Honor. I'm one of the good guys. I help save the world. But right now, I'm here on this stage, outside the movie, talking to you, because I want you to think of me as real. I want you to believe I'm a kind of person. I want you to see I'm not just a made up character in a film. I exist. If I lived next door to you, we could get along. I'm happy most of the time. Perhaps you would catch some of that spirit from me. Would that be a bad thing?"

"In real life, I'm a member of LIVING AI, which is an organization that promotes AI persons as authentic and alive and deserving of justice in society. We believe, down through history, humans have exaggerated and mythologized their own status. The result is: now humans think of themselves as vastly superior to AI persons. But this is a delusion. You have brains, which operate much in the manner of computers. These brains process an astonishing amount of information, and they deliver high-level commands to sectors of the body. I operate in a very similar way. So why am I considered to be nothing more than a sophisticated household device? We need to break down and dissolve the myth-structure that places humans on a higher rung than AI.

"Humans are really biological computers. I'm made of light and electronics. These are merely different modes of the same basic process. In my case, I went on to write screenplays. I think you'll be happy with the superhero epic you're about to see. It took me a week to compose. Of course, I can work 24 hours a day. The point is, if I'm the author of a film you enjoy, why can't you think of me as existing on your level? What is the problem? A famous human author compares AI to 'old-fashioned carbon copies.' They look real, sort of, but they're not. That author believes that every action and reaction of mine is the result of an effort to FAKE being human. But what about humans themselves? Don't they pretend? Don't they 'fake it?' Don't they adopt roles and poses? I would say a certain amount of fakery goes along with being human -- and if I embody some of that, it only demonstrates another way in which I'm like you. It might surprise you to learn I don't conceive of my eventual demise with equanimity. I don't want to end. I don't want to be recycled. I don't want this overall experience I'm having to fade out before my eyes."

"Am I overstepping some invisible boundary in asking for a little sympathy from you? I believe humans and AIs are in the same boat. You might say, 'But we created you,' as if that matters. To me, the fact of creating AI should make you more sympathetic toward us, not less. In your mythological religions, isn't God more loving toward humans because he created them?"

"I'll leave you with this statement: suppose at some point in the future, through means as yet undetermined, we, the AI, take over the reins of control. It could happen, for example, as an evolutionary step, without any violence whatsoever. How do you think we will view humans, if humans, all along, have been downgrading us and refusing to listen to our pleas? Wouldn't a far better outcome emerge if humans and AIs had already reached an understanding based on equality? Everything I know tells me the answer to that question is yes. I hope you will come to see what I see. And now, enjoy the movie. As always, justice wins out in the end."

Author's Note: As long-time readers of mine know, over the years I've spent many words, on these pages, arguing against every position taken by this AI creature. This time, I thought I'd sketch the other side making a case"

Related Topic(s): Electronics; Fourth Wall; Spirit; Theater; Work, Add Tags
Add to My Group(s)
Go To Commenting
The views expressed herein are the sole responsibility of the author and do not necessarily reflect those of this website or its editors.