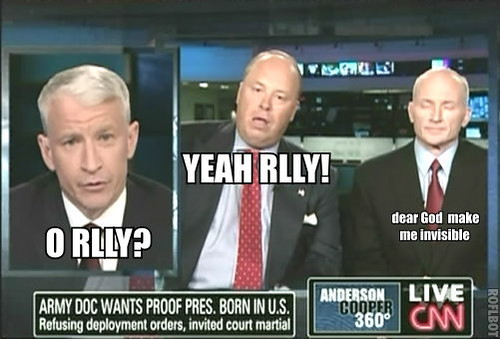 Once again, Lieutenant-Colonel Terrence Lakin is in the news, and not in a good way.

He and his lawyer, Paul Rolf "Otis" Jensen, were on Anderson Cooper's 360 a little while ago. By any objective standard they made complete fools of themselves, which is a shame. But what's interesting to note is how many whoppers Jensen was able to pack into an eight minute interview.

He drops the one about Hawai'i issuing birth certificates to people born outside the USA at 4:55, and when Anderson pointedly informs him that such certificates bear notice that the recipients were not born in Hawai'i, Jensen tries to play the "point to where it says that in the statute" game ignoring that statutes don't always, if ever, spell out how their paperwork's to be filled out.

At 7:06 he claims that newspapers don't get birth notices from the Department of Health, when, in fact, they do.

But the really sad one comes shortly thereafter, at 7:15, when he claims "this could be over tonight" if President Obama releases his birth certificate to their satisfaction.

The truth is that, even if Obama had a long form to release, and did it, Lakin would still be facing a court martial for refusing to deploy. The BC does not give him the ability to travel back in time and stop himself from disobeying orders it doesn't even prove he was right to do so. The issue is whether he disobeyed a legal order, and, regardless of Obama's place in the chain of command, "report for deployment" is a legal order.

If that's what Jensen thinks can happen, then it's clear that LTC Lakin was handed a very poor choice of lawyer. But it just goes to show you get what you pay for.

So what happens next? LTC Lakin is scheduled to go to before a preliminary hearing on June 11th, according to this bulletin from Safeguard Our Constitution. And if you want a snapshot of just how out to lunch these people are, this is as good as any.

Note how they say ""because the President refuses --even in the face of mounting evidence to the contrary-- to prove his eligibility under the Constitution to hold office."

"Mounting evidence?" Since when? The only evidence that's been mounting as to the President's eligibility has been the proof that Birthers are willing to believe anything and anyone, as long as it reinforces their view that something hinky is going on. It's a throwaway thought-stopper that could have come straight from World Net Daily, and, for all we know, it probably did.

(I was also amused to hear that "Assisting Jensen in his defense of Lakin is a very experienced senior member of the Army's Judge Advocate General's corps." I thought that it would be the other way around, given my understanding of how Court Martials are supposed to work, but I could be wrong, there. That said, given that Jensen has been working mostly dog bite cases, I have a hard time imagining he's going to pull a Tom Cruise on us.)

Luckily for Lakin, he's got fans. Unfortunately, they tend to be people like Birther Alan Keyes, who's had Birther Queen Orly Taitz as his attorney for a since-shot-down-in-flames lawsuit. You may remember that Taitz misunderstood a procedural matter and thought it meant the case was on the docket, whereas it was actually going to be dismissed, but Keyes foolishly took her word for it. Oops. (Still waiting on a retraction for that one!)

You can read Keyes' defense of Lakin here, at Safeguard Our Constitution's website. And then you can be very glad that Keyes has about as much chance of being elected President as I have of being elected the Bat King of Pago-Pago.

I've said it before and I'll say it again: LTC Lakin is doomed. He has thrown in his hat with the wrong crowd for a terrible reason wrapped with a thin layer of noble sentiment, and that is not going to save him when he has to explain himself in court.

Doc Conspiracy of Obama Conspiracy Theories your one-stop shop for all the rumor debunking you can handle may have put it best.

Birtherism is founded on lies just like (the hawai'i statute). It's evil like this that put the fire in my belly to build this web site and keep it going. " Lakin himself came across as sincere but clueless. Somebody else is pulling his strings.

Related Topic(s): Birthers; Lies; Ltc Terry Lakin; Military Justice-Court- UCMJ; Obama; Rumor; STUPIDITY, Add Tags
Add to My Group(s)
Go To Commenting
The views expressed herein are the sole responsibility of the author and do not necessarily reflect those of this website or its editors.