Democrats and progressives need to focus on what the United Electrical union calls the "first major US manufacturing strike of the Trump era." 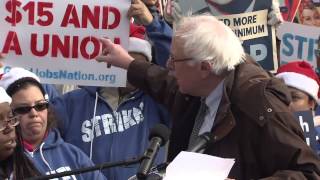 When 1,700 members of United Electrical, Radio & Machine Workers of America Locals 506 and 618 struck at the sprawling Wabtec locomotive plant in Erie, Pennsylvania, Tuesday morning, they got an immediate show of solidarity from one of the most prominent political figures in the United States.

"Americans are sick and tired of corporate America and their wealthy CEOs ripping off working families," announced Vermont Senator Bernie Sanders, in a tweet dispatched shortly after the picket line was established. "I'm proud to stand with the locomotive manufacturing workers of @ueunion Local 506 and 618 in their fight against GE/Wabtec to maintain decent wages and working conditions."

That's the right response from a contender for the Democratic nomination for the presidency. Democrats have to stand in outspoken solidarity with workers, especially when their unions are struggling to preserve manufacturing jobs and maintain fair wages in historic urban and industrial centers such as Erie.

Fights over the direction of American manufacturing, especially in the transportation sector, are not romantic struggles to preserve old or dying industries. Locomotive production is booming internationally because of the role that rail transportation is expected to play in a new and more environmentally sustainable economyand because new technologies are opening up dramatic new possibilities. The question is not whether there will be locomotive production, but whether new generations of workers will get a fair share of the future.

"I'm proud to stand with the locomotive manufacturing workers of @ueunion Local 506 and 618." @BernieSanders

The strike in Erie pits a union with deep roots in Western Pennsylvania and American manufacturing against a powerful multinational Webtec (Westinghouse Air Brake Technologies Corporation) that, after taking charge this week of a former GE Transportation manufacturing facility, has refused to maintain existing protections for workers. "We are extremely disappointed that the company could not see its way to agree to continue the terms and conditions that we have worked under for decades. Their refusal leaves us with no choice but to go out on strike to protect our members' and our children's future," says UE Local 506 president Scott Slawson.

Related Topic(s): Bernie Sanders; Bernie Sanders 2020; Manufacturing; Workers, Add Tags
Add to My Group(s)
Go To Commenting
The views expressed herein are the sole responsibility of the author and do not necessarily reflect those of this website or its editors.