It is outrageous that the House Speaker continues to block action to end US support for Saudi atrocities against Yemen. 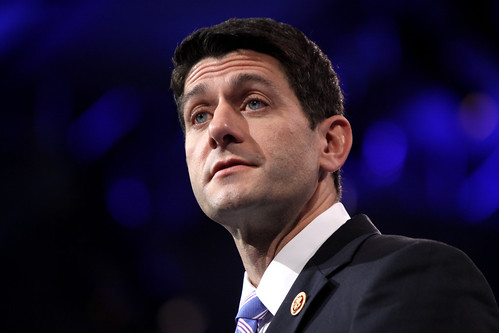 What the hell is wrong with Paul Ryan? At a point when the whole world is demanding urgent action to end the Saudi-led bombardment and starvation of Yemen, the Speaker of the House has been scheming to prevent congressional debate on a resolution to get the United States out of a humanitarian crisis.

This is not about partisanship or ideology. As Ryan was blocking action in the House this week, 11 Senate Republicans -- including some of the chamber's most conservative members -- voted with Democrats to open the Senate debate on ending US military support for the Saudi Arabia's assault on Yemen.

The 60-39 vote to advance the bipartisan effort by Senators Bernie Sanders (I-VT), Chris Murphy (D-CT) and Mike Lee (R-UT) to invoke the war-powers authority of the Congress to constrain military interventions and engagements by the Executive Branch, cleared that way for a 56-41 vote on Thursday in favor of the S.J.Res. 54: "A joint resolution to direct the removal of United States Armed Forces from hostilities in the Republic of Yemen that have not been authorized by Congress."

"Today we tell the despotic regime in Saudi Arabia that we will not be a part of their military adventurism," declared Sanders, who has for months made the case for congressional action on Yemen, waging a two-pronged campaign for the resolution. First, he made a moral argument, telling his colleagues they have a duty to end US support for Saudi abuses that have fostered a "humanitarian and strategic disaster" in Yemen -- a crisis so severe that United Nations officials say it could lead to the worst famine in a century. Second, the senator made a constitutional argument, explaining that "The Senate must reassert its constitutional authority and end our support of this unauthorized and unconstitutional war."

Both arguments were sound. And they gained traction with top Senate Republicans in the aftermath of the Saudi murder of Washington Post columnist Jamal Khashoggi. They chose, at the urging of Sanders and his allies, to embrace morality and their duty to the Constitution -- even as White House aides made every effort to thwart the resolution.

Related Topic(s): Children; Famine; Hell On Earth; Paul Ryan; Starvation; Yemen War, Add Tags
Add to My Group(s)
Go To Commenting
The views expressed herein are the sole responsibility of the author and do not necessarily reflect those of this website or its editors.