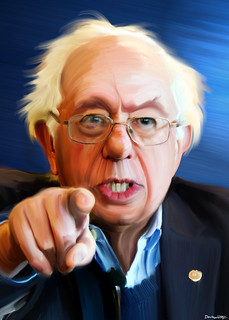 The independent senator from Vermont says the economic system is rigged against working-class Americans. He's right.

And yet, despite the formidable institutional obstacles stacked against him, Sanders is doing great: largely considered a shoo-in to win New Hampshire, leading in Iowa, closing the gap nationally. Surprised pundits are marveling at his popular momentum, ground organization and fundraising prowess. There is now a credible path to the Democratic nomination and, if he runs against GOP frontrunner Donald Trump, to the White House.

Center-right Hillaryworld wants to know: how did this happen?

Leftists wonder: is this cause for hope?

It is an amazing story. Everyone in a position to block Sanders' campaign did everything they could to sabotage him.

Knowing that coverage is the essential oxygen of politics, the media mostly ignored him. By one measure, corporate media gave Trump 23 times more coverage than Sanders! On the few occasions when they spilled a little ink on Bernie, it was to insult him and his socialist politics. (My personal Exhibit A was a New York Times piece that carried a photo that emphasized his bald spot.)

In the bag for Hillary Clinton and remembering the lesson of 2008 -- the more voters hear from her the less they like her -- the Democratic National Committee fed her aura of inevitability by refusing to give Bernie the exposure and legitimacy offered by a robust round of debates. Debates, the few of them the manipulative DNC chair and Hillary toady Debbie Wasserman Schultz allowed to take place, were scheduled for the nights known for low television viewership.

That tactic backfired. Hillary did better than Bernie in the first three debates. But no one saw her flex her foreign-affairs muscles.

Bernie got nothing but chicanery from the DNC, to the point that the Sanders camp had to sue to access its own voter data. Which only reinforced his image as a rebel -- not easy for a U.S. senator -- and further endeared him to his supporters.

Despite everything, Sanders could win.

Moreover, it's not just Sanders the candidate who is doing well. His "unusual" politics are becoming usual.

Sanders' self-labeling as a democratic socialist -- universally considered political suicide in the United States -- is catching on. In one of the most surprising poll results of the 2016 race, a recent survey of likely Iowa caucus-goers finds that more of them call themselves socialist (43%) than capitalist (38%).

Where did Iowa's socialists come from? They certainly weren't indoctrinated by the mainstream system. No ideology, not even radical Islam, has come under heavier systemic assault than socialism. From the Palmer Raids of a century ago to McCarthyism to the Tea Party's (sadly mistaken) insinuations that President Obama is a secret red, socialism has been the bete rouge of mainstream American politics: reviled in ridiculous movies, misrepresented and excluded from acceptable public debate, even on the watered-down liberalism that passes for a "left." Even in schools, socialism and communism are lied about -- if they're mentioned at all.

Related Topic(s): Democratic; Propaganda; Sanders-Bernard; Socialism; Socialist Organizer, Add Tags
Add to My Group(s)
Go To Commenting
The views expressed herein are the sole responsibility of the author and do not necessarily reflect those of this website or its editors.