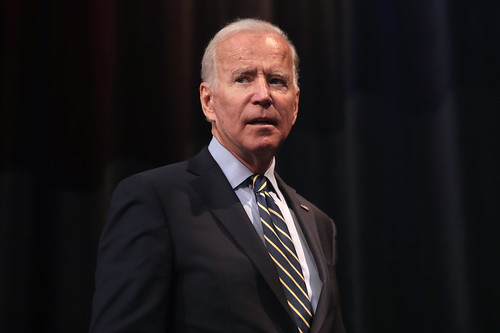 The corporate conservatives who control the Democratic Party are suffering from cheaters' remorse.

The DNC and their media allies (NPR, CNN, MSNBC, New York Times, Atlantic Monthly, Vox, etc.) subverted the will of primary voters, undermining initial front-runner Bernie Sanders in order to install the worst candidate of the 20 centrists in the campaign.

Now the power brokers are worried that the befuddled Biden, whom they touted as the Most Electable Against Donald Trump, will lose to him. Rather than take responsibility for their idiocy and force Biden to pull out of a race for which he is obviously physically and mentally unprepared, the corporatist sellouts are preemptively blaming the progressives who warned them about this exact scenario.

Sorry, right wingers. Biden is on you. You made him the presumptive nominee. If Trump wins again, it's your fault.

Just as it was last time.

Establishment panic over Biden is most palpable in the pages of the official party organ of the Democratic Party, the Times. "While [Biden] has held consistent leads in most national and swing-state polls, they have not been altogether comfortable ones," the paper noted on May 15.

"If Biden is to squeak by Trump in November, he requires a comfortable lead now. ...A CNN poll released on Wednesday found Mr. Biden leading the president by five percentage points nationwide, but trailing by seven points among voters in crucial battleground states...for some Democrats, the results of the CNN poll again raised the specter that Mr. Biden could win the popular vote but lose the Electoral College, as Hillary Clinton and Al Gore both did."

The Times is pushing Biden's candidacy via two lines of argument. First, lesser-evilism. As columnist Frank Bruni wrote May 17, he'll "take Biden's confusion over Trump's corruption." (Of course Biden is corrupt too.) Second, they claim, Biden should be acceptable. He isn't Hillary Clinton. Due to the coronavirus crisis, Bidenites say, their man is willing to pivot to the left. (Never mind that progressive programs need to be in place before a crisis, not ramping up a year after it begins.)

The second argument is the easiest to shoot down. Biden has a decades-long track record of voting and governing to the right, including voting to invade Iraq for no good reason. Even now, as tens of millions of Americans lose their jobs and thus their health insurance, Biden refuses to join the rest of the industrialized world by endorsing single-payer healthcare. Progressives don't trust Biden. They trust history. History proves Biden isn't one of them.

Bruni's argument involves magical thinking too. "At the end of the day, Biden can be trusted to do what Trump didn't and won't: stock his administration with qualified professionals. He could compensate for any supposed cognitive deficit with a surplus of talent," Bruni says. There is no evidence, none, zero, zip, that this is true. Biden could validate that argument by announcing his cabinet nominations now. But he's not.

Biden leaves progressive voters cold. That matters because the enthusiasm gap could decide the election. "Trump had a consistent edge over Hillary Clinton in enthusiasm [in 2016]," reported CNN's Harry Enten. "His voters were 4 points more likely to say they were very enthusiastic in voting for him than Clinton's were for her in the final ABC News/Washington Post poll, even as Clinton led overall. That enthusiasm advantage should have been one of the warning signals to the Clinton campaign. Trump's current edge in enthusiasm over Biden is even larger. In a late March ABC News/Washington Post poll, 53% of Trump backers said they were very enthusiastic about voting for him. Just 24% of Biden backers said the same about their guy."

If anything, the enthusiasm gap might widen as billions of dollars of stimulus payment letters bearing Trump's signature hit voters' bank accounts and he wraps himself in the trappings of the presidency while Biden sits in his basement trying to figure out how to use his computer camera. If I were Trump, I'd be planning my second term.

Let's not forget how we got here.

Related Topic(s): Bernie Sanders; Joe Biden 2020 Campaign; Progressives; Race; Trump Bully In Chief; Trump Campaign; Trump Sending Checks; Trump Support, Add Tags
Add to My Group(s)
Go To Commenting
The views expressed herein are the sole responsibility of the author and do not necessarily reflect those of this website or its editors.