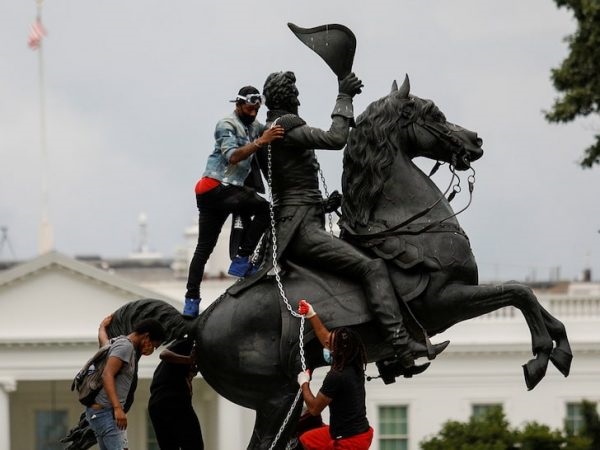 "This is not a momentary civil disturbance. This is a serious, and highly organized political movement"It is deep and profound and has vast political ambitions. It is insidious, it will grow. It's goal is to end liberal democracy and challenge western civilization itself. This is an ideological movement" Even now, many of us pretend this is about police brutality. "We think we can fix it by regulating chokeholds or spending more on de-escalation training. We're too literal and good-hearted to understand what's happening. "But we have no idea what we are up against. ..These are not protests. This is a totalitarian political movement and someone needs to save the country from it."Tucker Carlson

Tucker Carlson is right, the protests and riots are not a momentary civil disturbance. They are an attack the Constitutional Republic itself, the heart and soul of American democracy. The Black Lives Matter protests are just the tip of the spear, they are an expression of public outrage that is guaranteed under the first amendment. But don't be deceived, there's more here than meets the eye. BLM is funded by foundations that seek to overthrow our present form of government and install an authoritarian regime guided by technocrats, oligarchs and corporatists all of who believe that Chinese-type despotism is far-more compatible with capitalism than "inefficient" democracy. The chaos in the streets is merely the beginning of an excruciating transition from one system to another. This is an excerpt from an article by F. William Engdahl at Global Research:

"By 2016," Black Lives Matter had established itself as a well-organized network".. That year the Ford Foundation and Borealis Philanthropy announced the formation of the Black-Led Movement Fund (BLMF), "a six-year pooled donor campaign aimed at raising $100 million for the Movement for Black Lives coalition" in which BLM was a central part. By then Soros foundations had already given some $33 million in grants to the Black Lives Matter movement....

The BLMF identified itself as being created by top foundations including in addition to the Ford Foundation, the Kellogg Foundation and the Soros Open Society Foundations." ("America's Own Color Revolution", Global Research)

$100 million is alot of money. How has that funding helped BLM expand its presence in politics and social media? How many activists and paid employees operate within the network disseminating information, building new chapters, hosting community outreach programs, and fine-tuning an emergency notification system that allows them to put tens of thousands of activists on the streets in cities across the country at a moment's notice? Isn't that what we've seen for the last three weeks, throngs of angry protestors swarming in more than 400 cities across America all at the beck-and-call of a shadowy group whose political intentions are still not clear?

And what about the rioting, looting and arson that broke out in numerous cities following the protests? Was that part of the script too? Why haven't BLM leaders condemned the destruction of private property or offered a public apology for the downtown areas that have been turned into wastelands? In my own hometown of Seattle, the downtown corridor- which once featured Nordstrom, Pottery Barn and other upscale retail shops- is now a checkerboard of broken glass, plywood covers and empty streets all covered in a thick layer of garish spray-paint. The protest leaders said they wanted to draw attention to racial injustice and police brutality. Okay, but how does looting Nordstrom help to achieve that goal?

And what role have the Democrats played in protest movement?

They've been overwhelmingly supportive, that's for sure. In fact, I can't think of even one Democrat who's mentioned the violence, the looting or the toppling of statues. Why is that?

It's because the Democrats think that kowtowing to BLM will give them the winning edge in the November balloting. That's what it's all about. That's why they draped themselves in Kente cloth and knelt for the cameras. They think their black constituents are too stupid to see through their groveling fakery. They think that blacks will forget that Joe Biden pushed through legislation "which eliminated parole for federal prisoners and limited the amount of time sentences could be reduced for good behavior."

According to the Black Agenda Report: "Biden and (South Carolina's Strom) Thurmond joined hands to push 1986 and 1988 drug enforcement legislation that created the nefarious sentencing disparity between crack and powder cocaine as well as other draconian measures that implicate him as one of the initiators of what became mass incarceration." Biden also spearheaded "the attacks on Anita Hill when she came forward to testify against the supreme court nominee Clarence Thomas". All told, Biden's record on race is much worse than Trump's despite the media's pathetic attempts to portray Trump as Adolph Hitler. It's just more bunkum from the dissembling media.

Bottom line: The Democrats think they can ride racial division and social unrest all the way to the White House. That's what they are betting on.

So, yes, the Dems are exploiting the protests for political advantage, but it goes much deeper than that. After all, we know from evidence that was uncovered during the Russiagate investigation, that DNC leaders are intimately linked to the Intel agencies, law enforcement (FBI), and the elite media. So it's not too much of a stretch to assume that these deep state agents and assets work together to shape the narrative that they think gives them the best chance of regaining power. Because, that's what this is really all about, power. Just as Russiagate was about power (removing the president using disinformation, spies, surveillance and other skulduggery.), and just as the Covid-19 fiasco was essentially about power (collapsing the economy while imposing medical martial law on the population.), so too, the BLM protest movement is also about power, the power to inflict massive damage on the country's main urban centers with the intention of destabilizing the government, restructuring the economy and paving the way for a Democratic victory in November. It's all about power, real, unalloyed political muscle.

Surprisingly, one of the best critiques of what is currently transpiring was written by Niles Niemuth at the World Socialist Web Site. Here's what he said about the widespread toppling of statues:

"The attacks on the monuments"were pioneered by the increasingly frenzied attempt by the Democratic Party and the New York Times to racialize American history, to create a narrative in which the history of mankind is reduced to the history of racial struggle. This campaign has produced a pollution of democratic consciousness, which meshes entirely with the reactionary political interests driving it.

It is worth noting that the one institution seemingly immune from this purge is the Democratic Party, which served as the political wing of the Confederacy and, subsequently, the KKK.