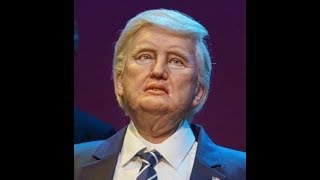 The Golden Globes and Screen Actors Guild Awards have been bestowed and Academy Award nominations will be announced today. And, of course, President Donald Trump last week conferred his Fake News Awards.

Now it's our turn to weigh in, with the Trumpys, recognizing the worst elements of what is likely to go down as the worst presidency in American history.

Every day through January 29, we'll announce nominations in a category and invite Twitter voting to select the worst of the worst. We'll announce the losers (winners) on January 30, the day of the State of the Union.

We begin today with nominations for the Trumpy for the Worst Corrupting Conflict of Interest.

Trump's refusal to divest his business interests is one of the defining features of his presidency, creating direct conflicts for the president relating to a wide swath of issues, signaling his utter disregard for ethical norms, and creating a climate in which governmental corruption is normalized. Against this backdrop, it's no surprise that the contest for Worst Corrupting Conflict of Interest is so intense.

Nominees for today's Trumpy, "Worst Corrupting Conflict of Interest," are:

Read up on the nominees: https://t.co/jfxsPklM8e

And the nominees are:

Carl Icahn: Refining the Meaning of Conflict. There's a reason that Carl Icahn was a model for the Gordon Gekko character who famously stated that "greed is good." Appointed by President Trump to the made-up position of "special adviser to the president of the United States on regulatory reform," Icahn tried to use the position to force a change in ethanol rules that would save an oil refinery he owned $200 million annually. Icahn didn't bother to deny his self-interest: "I own a refinery. Who knows it better than me? Why shouldn't I advocate?" he told Bloomberg. The prospect of winning his desired change to ethanol rules boosted the value of his stock by hundreds of millions of dollars, but his scheme collapsed under public scrutiny and with opposition from Big Oil. Afterwards, he quickly abandoned his "special advisor" position.

Jared Kushner and the Middle East: Like Father, Like Son-in-Law. Like the president, Jared Kushner has put most of his financial holdings in trust -- but has not divested. Those financial holdings create a multitude of conflicts, including especially as regards his role in setting U.S. policy related to the Middle East. As the New York Times notes: "Even as Mr. Kushner's company maintains extensive business ties to Israel, as a top White House adviser, he has been charged with leading American efforts to broker peace in the Middle East as part of his broad global portfolio." And the family business ties with Israeli businesses are deepening, even while Kushner serves in the White House and engineers a major reorientation of U.S. Middle East policy.

Scott Pruitt and Dow Chemical: Conflicts on the Brain. At the U.S. Environmental Protection Agency (EPA), Scott Pruitt is enabling polluters in countless ways (the subject of its own Trumpy award; stay tuned), but his gift to Dow Chemical is particularly pernicious. Under President Barack Obama, the EPA proposed to ban a brain-damaging pesticide sold by Dow Chemical. Pruitt reversed the decision. Did it matter that Dow Chemical contributed $1 million to Trump's inauguration or that its CEO met with Trump five times? You decide.

The Tax Scam: Tax Cuts for Trump and the Cabinet. A super-rich cabinet designed and helped ram through Congress a tax bill that will transfer more than a trillion dollars ... to the super-rich and the corporate class. Among notable features, the bill doubles the amount exempt from the estate tax, a huge boon for Trump and his billionaire cabinet. The pass-through provisions will confer enormous benefits on Trump himself, lowering the tax rate he pays on his business operations; a last-minute change to the bill made the deal even more generous for Trump. "This is going to cost me a fortune," Trump said untruthfully. But he revealed the reality at a gathering at Mar-a-Lago: "You all just got a lot richer," he told his rich friends.

The Trump International Hotel in Washington, D.C. and Mar-a-Lago: The President Cashes In. The Trump International Hotel in D.C. is in Washington's historic Old Post Office, and is leased from the government. That lease by its plain terms prohibits the lessee from holding elected office, but with Trump now on both sides of the deal, it's going unenforced. Meanwhile, the hotel has become a go-to venue for foreign governments, including Saudi Arabia, political campaigns and industry groups -- from the National Mining Association to the national candy association -- to hold events and curry favor with the president. "Why wouldn't I stay at his hotel blocks from the White House, so I can tell the new president, 'I love your new hotel!' Isn't it rude to come to his city and say, 'I am staying at your competitor?'" one Asian diplomat told the Washington Post. Meanwhile, Mar-a-Lago has doubled its initiation fees -- but offers direct access to the president.

Which corrupting conflict is the worst? Vote here.

Robert Weissman is the president of Public Citizen. Weissman was formerly director of Essential Action, editor of Multinational Monitor, a magazine that tracks corporate actions worldwide, and a public interest attorney at (more...)

Related Topic(s): Awards; Corruption; Mar-a-lago; President; The Trumpys, Add Tags
Add to My Group(s)
Go To Commenting
The views expressed herein are the sole responsibility of the author and do not necessarily reflect those of this website or its editors.

Big Business Is Even More Unpopular Than You Think