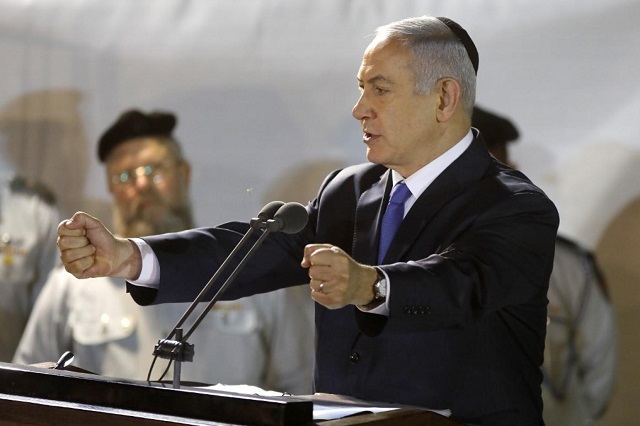 After winning the Israeli election with a slim majority, in a campaign that grew more sordid and vilifying by the day, Benjamin Netanyahu is poised to begin his fifth term as Israeli prime minister.

The culmination of his dirty tricks campaign was an election-day stunt in which his Likud party broke regulations and possibly the law by arming 1,200 activists with hidden cameras, to film polling stations in communities belonging to Israel's large Palestinian minority.

Netanyahu justified the move by saying it would ensure the election was "kosher". Yet again, Israel's prime minister made it clear that the country's 1.7 million Palestinian citizens were unwelcome interlopers in what he regards as an exclusively Jewish political process.

The PR firm behind the stunt admitted another motive. The goal was for the cameras to be quickly discovered by police and thereby scare the one in five citizens who are Palestinian into staying home. A low turnout by Palestinian voters in Israel would ensure a stronger parliamentary majority for Netanyahu's coalition.

In fact, slightly less than half of the minority cast a ballot, although the reason was probably as much down to their exasperation at a series of ever more right-wing Netanyahu governments as it was a fear of surveillance at polling stations.

When coalition negotiations this week are complete, Netanyahu is likely to head the most ultra-nationalist government in Israel's history one even more extreme than his last one.

His coalition, comprising settler factions and religious fundamentalists, will even include a party hosting political refugees from the previously outlawed Kach party anti-Arab racists banned in the US as a terror organisation.

The official opposition will be the Blue and White party led by a group of hawkish former generals assuming Netanyahu doesn't try to lure former army chief of staff Benny Gantz into a national unity government of the right.

In Washington, Netanyahu can rely on the full-throated support of Donald Trump's administration.

In other words, Netanyahu will face no serious domestic or international obstacles as he implements the agenda of the right. He will entrench control over the last fragments of what was once assumed to be an emerging Palestinian state and he will step up attacks on the rights of Israel's Palestinian citizens, in line with the Nation-State Basic Law he passed last summer.

The biggest trouble facing Netanyahu once he forms a new government will not be political but legal.

During the election campaign, Israel's attorney general, Avichai Mandelblit, announced that Netanyahu would soon be indicted on a series of corruption charges.

The delay is largely a formality, giving the prime minister a final chance to defend himself at a special hearing. In the meantime, Netanyahu hopes he can find a way to ride out the charges.

One option is simply to drag out any trial, insisting it be deferred indefinitely on the grounds that he needs to focus on pressing matters of state. At the same time, he can rile up supporters and intimidate the judiciary by claiming that the courts are trying to overturn the will of the people.