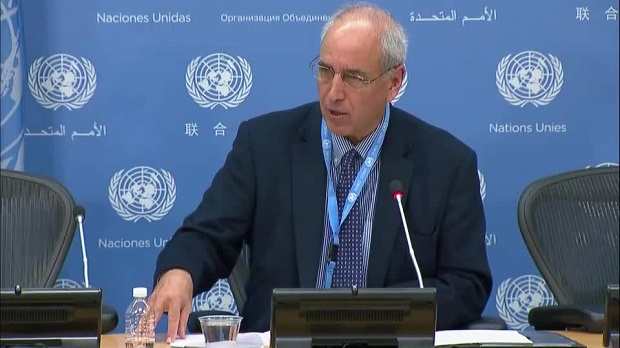 The United Nations' independent expert on human rights in the Palestinian territories issued a damning verdict last week on what he termed "the longest belligerent occupation in the modern world".

He warned of a recent surge in violence against Palestinians from settlers, assisted by the Israeli army, and a record number of demolitions this year of Palestinian homes in East Jerusalem evidence of the ways Israel is further pressuring Palestinians to leave their lands.

He urged an international boycott of all settlement products as a necessary step to put pressure on Israel to change course. He also called on the UN itself to finally publish as long promised a database that it has been compiling since 2016 of Israeli and international companies doing business in the illegal settlements and normalising the occupation.

Israel and its supporters have stymied the release, fearing that such a database would bolster the Boycott, Divestment and Sanctions (BDS) campaign that seeks to end Israel's impunity.

Shamgar was a reminder that the settlers have always been able to rely on the support of public figures from across Israel's political spectrum. The settlements have been viewed as a weapon to foil the emergence of a Palestinian state.

Perhaps not surprisingly, most obituaries overlooked the chicanery of Shamgar in building the legal architecture needed to establish the settlements after Israel occupied the Palestinian territories in 1967.

But in a tweeted tribute, Benjamin Netanyahu, the interim prime minister, noted Shamgar's contribution to "legislation policy in Judea and Samaria", using the Israeli government's term for the West Bank.

It was Shamgar who swept aside the prohibition in international law on Israel as an occupying state, transferring its population into the territories. He thereby created a system of apartheid: illegal Jewish settlers enjoyed privileges under Israeli law while the local Palestinian population had to endure oppressive military orders.

Then, by a legal sleight of hand, Shamgar obscured the ugly reality he had inaugurated. He offered all those residing in the West Bank Jews and Palestinians alike access to arbitration from Israel's supreme court.

It was, of course, an occupier's form of justice and a policy that treated the occupied territories as ultimately part of Israel, erasing any border. Ever since, the court has been deeply implicated in every war crime associated with the settlement enterprise.

As Israeli lawyer Michael Sfard noted, Shamgar "legalised almost every draconian measure taken by the defence establishment to crush Palestinian political and military organisations", including detention without trial, house demolitions, land thefts, curfews and much more. All were needed to preserve the settlements.

Shamgar's legal innovations endorsing the systematic abuse of Palestinians and the entrenchment of the occupation are now being expanded by a new generation of jurists.

Their latest proposal has been described as engineering a "revolution" in the occupation regime. It would let the settlers buy as private property the plots of occupied land their illegal homes currently stand on.