Despite the China-India border standoff, US economic warfare against Russia, and other woes, the five countries' trade ministers concentrated on creating conditions for better cooperation 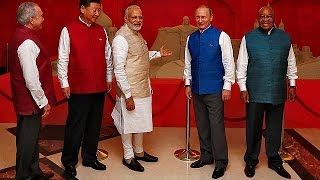 Related Topic(s): Brics; Dollar; National Priorities Project; National Service; Trade; Yuan, Add Tags
Add to My Group(s)
Go To Commenting
The views expressed herein are the sole responsibility of the author and do not necessarily reflect those of this website or its editors.