The two cities are, of course Paris and London, two of the world's major metropolises of the time (end of the 18th century), but oh so different from each other in so many ways. And so we have "The Mueller Report" on, primarily, the investigation headed by Robert Mueller on: a) Russian interference in the 2016 Presidential election and its aftermath, b) possible Trump Campaign and Presidency cooperation/coordination with it, and c) attempts by President Trump to obstruct justice in a variety of ways relating to one or another of the investigations of the Russian interference and related matters. 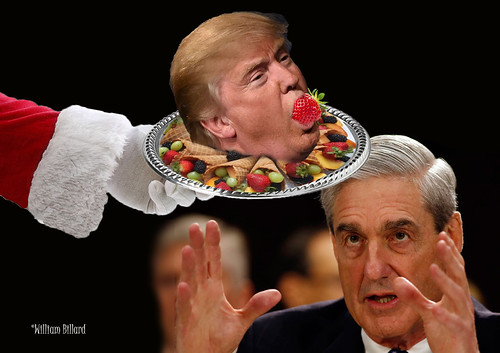 Bob Mueller's dream wish to Santa at Christmastime (says the maker of the image): We hope that's it. But we will find out for sure only if Mueller testifies before Congress (and maybe not even then).
(Image by wbillard)   Details   DMCA

As is well known, the Report is over 400 pages long. As is also well-known, the full Mueller Report has yet to see the light of the public's and the Congresses' day, "redacted" as it has been by President Trump's new in-house lawyer, William Barr (who also carries the tile of "Attorney General of the United States") (https://www.opednews.com/articles/Katy-Barr-the-Door-by-Steven-Jonas-Congress_Evidence_Fraud_Fraud-190325-684.html ).

There is also the "Barr Report," that is the mis-leading 3 ½ page summary that Mr. Barr offered to the public some days before he released his "censored-for-the-benefit-of-the-President-to-the-extent-he-thought-he-could-pull-it-off" (otherwise known as the above-mentioned "redacted") version of the Report. (And then there was also the presser-spin that Barr put on the redacted version before he released it.) Neither the public nor the Congress has, as of this writing, seen the full Report. If Mr. Barr has his way, neither the public nor the Congress will ever see the full Report (less any must-be-protected national security matters). This of course is because the President has been "fully vindicated" on both the "collusion" and obstruction of justice matters.

But wait a minute. If the President has been" fully vindicated" why wouldn't he and his boy Barr want the full Report released? And if the President had been "fully vindicated" why are there two completely different versions of the Report circulating in the media, creating the above-mentioned "Tale of Two Mueller Reports?" One version, from such sources as The Times, the Washington Post, and MSNBC, representing what are apparently very careful and complete analyses of the available text, shows:

a) That there was extensive interference in the 2016 Presidential Campaign by elements of the Russian government and minions, on behalf of the Trump campaign, that the Trump campaign knew of them, but while it took advantage of the interference (meeting the dictionary definition of "collusion," which is not a crime), it did not do so in a manner that rose to a matter of conspiracy (which is a crime) that could be proven beyond a reasonable doubt in a court of law. That there was collusion, by definition (as in the Random House Unabridged Dictionary, 2nd ed., "a secret agreement, especially for fraudulent or treacherous purposes") is shown by the evidence. e.g., see Yourish and Buchanan, below. That there was a provable conspiracy to engage in it was not proven by the Mueller team. That the Report did not, as far as I know, define either "collusion" or conspiracy to commit it. In my view, this is most unfortunate.

b) That there were many instances of attempts to obstruct justice by the President and his men and women is clearly shown by the evidence, e.g., see Schmidt and Savage below.

And so, the Report would seem to be pretty clear in what it says, although it is over 400 pages long and contains many redactions. Nevertheless, as the title of this column says, in terms of the reporting/-presentation of its findings, it is as if there were two completely separate, completely contradictory Reports.

The reporting of the bulk of the print and (mainly cable) TV media on the Report is consistent with what is presented very briefly above: that the Russians had an extensive and sophisticated campaign of (mainly) internet interference in the 2016 Presidential campaign; that it was carried out to harm the campaign of Hillary Clinton and benefit that of Donald Trump; that the President's men had frequent interactions with various Russians although such activity did not rise to the level of provable conspiracy; and that the President attempted to obstruct justice on a number of different occasions. That's one version.

But then there is an entirely different version of the Report, presented by Fox"News" and many (but definitely not all) of its reporters and analysts. According to this team, headed, of course, by Sean Hannity, the Report absolutely clears the Trump team, as the President himself said on an uncountable number of occasions, of "collusion with the Russians." It's "all made up." As for obstruction as it appears in the Report, well, that tends to be downplayed, except that the President himself says that the Report clears him on that charge (when it clearly doesn't). But then the purveyors of the, shall we say, different version, go on to deal with a variety of other topics/subjects. 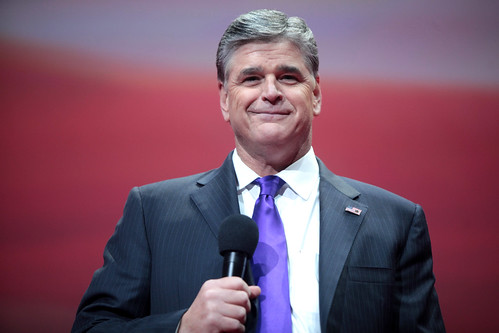 Sean Hannity. So! You thought I would put up a caricature, didn't you? The man does actually smile once in a while. especially when he thins that he has trapped an anti-Trumper (which can be done, by staying in the fact-free FoxZone).
(Image by Gage Skidmore)   Details   DMCA

One is the origin of the Mueller probe itself which they claim is entirely illegitimate, the product of some "Deep State" which was out to "get the President" and prevent his election (a task with they obviously dealt with total incompetence). That the whole probe began because of the so-called "Steele Dossier" (it didn't), which was funded from its beginning by the Clinton Campaign (it wasn't; Steele's work was funded in the first instance by an anti-Trump Republican group, and even when the Clinton campaign took it over they used little of it because they were concerned a) with its veracity and b) its salaciousness in one instance. (Some time ago I published a report on an extensive analysis of Christopher Steele and his dossier by Jane Mayer of The New Yorker. She came to the conclusion that for the most part it is accurate.) The second version of the Report talks about one Carter Page a lot and how he was unfairly treated by the FBI and Mueller. (See my column on that worthy at: click here)

The second version also, in relation especially to Page, delves into FISA warrants and how they were issued illegally and unjustly and were major sources of the "spying." It is not only the likes of Hannity and the President but also A.G. Barr who assert that this occurred at the beginning of the counter-intelligence investigation that the FBI had started based on information that had been coming in from foreign intelligence agencies.

It happened that the FBI started it up in the summer of 2016 based not on anything to do with Page (or the Steele Dossier as it happened) but rather with George Papadopoulos and other sources. And so on and so forth. That will not prevent Presidential-puppy Bill Barr from starting an investigation of how what became the Mueller probe got started, in parallel to one on that subject that the Dept. Of Justice Inspector General is already carrying out.

But the point here is that if one listens to the Second Version of the Report virtually nothing that is really in it is covered. What is, in this version, the case being made that it is, as the President has been saying almost from the beginning of the process, it is a "hoax," a "witch-hunt," a "plot by the Deep State" (this one is especially pushed by left-wingers who are bashing it too). The purpose, they postulate, is to delegitimize Trump, based on fiction, and lead the nation into nuclear war with Russia. (In this they ignore Trump's own initiatives in further building up the Military-Industrial complex and the U.S. nuclear weapons capability, as well as the possible militarization of U.S. space activities, and etc. But that is another matter.)

Steven Jonas, MD, MPH, MS is a Professor Emeritus of Preventive Medicine at StonyBrookMedicine (NY) and author/co-author/editor/co-editor of over 35 books. In addition to his position on OpEdNews as a "Trusted Author," he is a Senior Editor, (more...)
Related Topic(s): Collusion; Conspiracy; Democrats; Evidence; Hoax; Impeachment; Indictments; Investigations; Justice; Law; (more...) Mueller Investigation; Mueller Report; President; Redactions; Subpoena, Add Tags  (less...)
Add to My Group(s)
Go To Commenting
The views expressed herein are the sole responsibility of the author and do not necessarily reflect those of this website or its editors.