Plus: Trump/Russia -- What's Up? And a Multiple-Choice Sessions Question.

Introduction: Carter Page's name doesn't come up much in the mainstream media's coverage of Trump/Russia and the Mueller investigation. Yet Sean Hannity and others on the Right go out of their way to try to discredit in advance any findings on him, based on their falsification of the basis of the "FISA warrant." This column is about just why they are doing that.

When mainstream reporting is done on the Mueller investigation of the Trump/Russia connection, a number of names are mentioned. (By the way, just so you know, I don't consider the Fox"News"Channel, also known variously as "Trump TV" [MSNBC's Chris Hayes] or the "Propaganda Channel" [I began using the term in 2015] to be "mainstream," except, of course, for the Radical Right.) Among them are persons who have been investigated who have already pled guilty to some relatively minor charge and have presumably become cooperating witness: Gen. Mike Flynn, Rick Gates, George Papadopoulos, Richard Pinedo. Then there is the one who has been indicted and is strongly maintaining his innocence, Paul Manafort. Also indicted are the "13 Russians" and un-named co-conspirators (who may or may not be indicted at some point). But there is one name that has floated around the whole "Trump/Russia" thing from just about the time it began, that doesn't get much mention in the mainstream media. That is Carter Page.

The first time I heard of Carter Page was when he was on a Chris Hayes MSNBC show in 2016. He had been previously identified by The New York Times as a "person of interest" (for journalists at least) the Trump/Russia probe. Page came across as somewhat dis-connected, claimed that he didn't know much about Russia, and that he certainly played no role in any Trump/Russia connections. He repeated these claims recently in an interview with the radio/TV right-wing talker Sean Hannity. As a matter of fact, while Page doesn't show up in the mainstream media in re Trump/Russia, he sure shows up with regularity on Hannity's version of events.

1970's inventions that changed our way of life. When you enter .Carter Page. into a common image search engine, this is one of the choices you get. But no image of him.
(Image by brizzle born and bred)   Details   DMCA

In Hannity's version of "Trump/Russia," of course there is nothing there. It's all made up. It's a plot to unseat Trump made up by the "Deep State," (FBI, CIA, NSA, and etc.). (In this description of these events they share much with certain elements of the US Left as found in The Nation.) One does not have to watch Hannity with regularity (although I am now doing so) to get his message. For he repeats more or less the same thing every evening. One of his constant themes is that the whole Mueller investigation should be thrown out because of a supposedly defective application for a FISA warrant on Page (after he had left the Trump campaign, with which he was associated for only a few months. Pager joined a group of folks who at one time were pumped by Trump as key advisors [see Papadopoulos], but later put in the "who? Never knew him much" group).

Hannity does this in open, close, cooperation with Devon Nunes, who is the Republican Chair of the House Intelligence Committee. I have already pointed out that Nunes is playing a very unusual role in the whole investigation, that is working very closely with the White House, on a political, not legislative, matter. This is an element of what I call "21stCentury Functional Fascism." It is epitomized by the "Nunes Memo," which purports to show that the FBI somehow tricked a FISA court judge into approving a warrant allowing the FBI to spy on Page, in October 2016. That memo, in my view (and that of many other observers), has been thoroughly rebutted by the Democratic Response to it.

But, it is not my purpose here to engage in discussion of whether or not the October, 2016 FISA warrant on Carter Page was justified or not. Rather, of most interest to me is just why Nunes and the Republican majority on the House Intelligence Committee, and Sean Hannity and numerous other right-wing talkers, and the President himself from time-to-time, have made such a fuss about it. For contacts with various Russians, including possible intelligence operatives, Page had been under FBI surveillance off-and-on since 2013. He was admittedly in contact with Russians during the Republican National Convention in 2016. He may have played a role in the watering down of an anti-Russia-in-Ukraine plank in the Repub. National Platform. And then came the FISA warrant, which presumably justified wire-tapping, after he formally left the campaign. And although Nunes and Hannity would have you believe otherwise, FISA warrants are very long documents, filled with tons of evidence justifying the request, never drawn from just one source. In Page's case, there were apparently four FISA warrants obtained over time, approved by four different, Republican-appointed, FISA court judges.

Do I have any inside information? Certainly not. BUT, isn't it interesting that Hannity/Nunes are focusing so heavily on Page and the FISA warrant, to the exclusion of just about everything else (except of course anything they can attribute to President Obama and Hillary Clinton --- but that's another matter). With all the people they could be focusing on and trying to discredit the investigation of --- that is the above list of indictees/guilty-pleaders --- they focus on Page.

This might be simply a classical Trumpite WMD (Weapon of Mass Distraction). But perhaps it's something else. Who knows what those Page wiretaps might contain. Who knows who else's voices might appear on them. Who knows if such other persons know that they are on the tapes, if they in fact are. But if there is "something" on them, and that something is significant for the Mueller investigation, wouldn't you, if you were a Trumpite, be trying as hard as you could to discredit, not the source, in this case, but just how that information was obtained? And if you were Mueller, and you had some legal bombshells in hand from those tapes, wouldn't you be holding off on making that information public, in one way or another, right now?

I might be way off, here. But maybe not. As they used to say in the days of radio, days in which I grew up, stay tuned.

Postscript: Ever wonder why Trump is so "soft" on Russia, as many politicians, even Repubs., accuse him of being? Could it be that Putin really does have the goods on him, that the "Steele Dossier" really is accurate? Hmmm! And then, wonder why Trump has not pushed his government at all to get into the guts of Russian interference in the 2016 elections and work all out to prevent it from happening in 2018? Could it be that Trump knows, if not all about it in 2016 (and he would have been well-advised to keep the Russian operation on his behalf at arms-length), then at least that it did help him to win. And then, if that were the case, especially given how far in the tank Repub. 2018 election hopes are right now, wouldn't Trump want the same kind of interference, on behalf of the Repubs., to happen again, again without any direct involvement on this part? Just thinkin'. 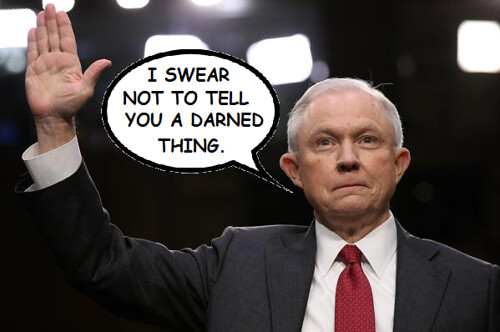 Jeff Sessions Testifies. Could get away with it before the Senate. Could not in a room with Mueller investigators, armed with who knows what sworn testimony from others.
(Image by Mike Licht, NotionsCapital.com)   Details   DMCA

Post-post script: The real reason Jeff Sessions will not resign? A) Because he loves his job. B) Because he really wants to restart the "Drug War." C. Because he really wants to have a national campaign for Mandatory Minimum Sentences (which of course overwhelmingly harm the non-white community). D) Because he knows that if he does, given his position with the Trump Campaign and the Transition, he would immediately a subject for investigation by the Special Counsel. Odds on, it's "D," folks.

Steven Jonas, MD, MPH, MS is a Professor Emeritus of Preventive Medicine at StonyBrookMedicine (NY) and author/co-author/editor/co-editor of over 35 books. In addition to his position on OpEdNews as a "Trusted Author," he is a Senior Editor, (more...)
Related Topic(s): Carter Page; Elections; FISA; Fascism; Intelligence; Media; Propaganda; Republican; Surveillance; Wiretaps, Add Tags
Add to My Group(s)
Go To Commenting
The views expressed herein are the sole responsibility of the author and do not necessarily reflect those of this website or its editors.