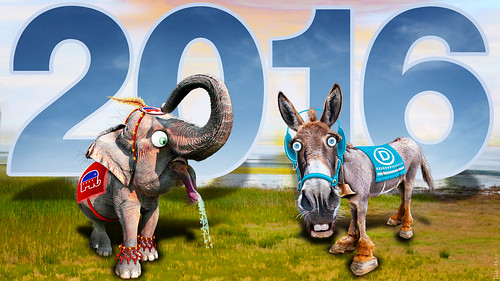 Republican Elephant & Democratic Donkey 2016
(Image by DonkeyHotey)   Details   DMCA
How to not talk about climate change -- talk about Melania's t*ts, Donald's pecker, Hillary's e-mails. How did "the greatest country on earth", "the exceptional one", become a pathetic, freak laden sideshow? Many "lesser" countries on the planet are serious about the most important issue of the day. They are doing serious things and we are contemplating electing someone that embodies everything that this most "powerful" and "exceptional" country philosophically and constitutionally deems repugnant and self-destructive -- a nation of immigrants demonizing immigrants is a special kind of awful and a type of collective mental illness.

Destructive World Corporate Dominance could not have dreamed of a better situation than what is playing out now. They are sneaking around the reeking perimeter of this bleak circus still actively plotting the destruction of the planet. This train wreck is giving Hillary fantastic cover -- allowing her to avoid any meaningful discussion about climate change and ecological degradation. Trump will not be elected and Hillary will be elected without true, meaningful debate about climate change or many other pressing issues. We will talk about her hair, her husband's past indiscretions and every stinking, repugnant, unhinged utterance of Mr. Trump.

There is a positive in all of this -- it has exposed the absolute failed state of American journalism. Corporate media has won and we are now watching the power of the press not as "The Fourth Estate", as the capitalist propaganda arm of Corporate America.

Hillary could become the American President that destroyed the planet. Not because she intends to -- because the issue has been orphaned by potential American Fascism, Citizen circus fatigue and indifference and rampant American militarism. Conservative Capitalism and unchecked Corporate ascendance have assiduously and effectively insinuated themselves into the culture. Cognitive dissonance has won the day. The Typical American citizen cannot hold in his/her brain that America is good and Corporate dominance is bad because they have become one in the same. America is a brand.

This is an absolutely failed Presidential political season. There has been a total lack of meaningful debate and discussion, with the exception of Bernie's attempts, about substantive issues. If Hillary loved this country as much as she appears to love the possibility of ultimate power she would stop this sham right now and demand other parties enter the arena so that something possibly healthy could come out of this. When she wins she will win by default. The people will not have spoken. Her Presidency may well be the first in our history that resembles a coup.*

There is a question that needs to be asked of Secretary Clinton. Not about Benghazi or e-mails but about intention -- "Secretary Clinton, Why did you give paid speeches to Wall Street?" Everyone has asked and is asking about what she said, not about why she did it. In the Buddhist concept of 'Right Intention" the question is asked -- what are you creating with your actions? I believe contained in this question is a tremendous amount of debate that would do this place a world of good. Moving forward successfully warrants Bernie asking the question and the voters demanding an answer. I believe the answer to this question would unravel and clarify the apparent fuzziness and opacity of the motives of Hillary Clinton and The Clinton Foundation.

The question should be asked in the nature of a Koan. The questioner should not allow facile answers.

*Depending on which conspiracy theory you ascribe to

Related Topic(s): 2016 Elections; Bernie Sanders; Buddhist; Climate Change; Donald Trump; Hillary Clinton; Journalism, Add Tags
Add to My Group(s)
Go To Commenting
The views expressed herein are the sole responsibility of the author and do not necessarily reflect those of this website or its editors.