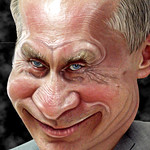 I'm ashamed, but I'll go ahead and admit it: For years, I thought Rupert Murdoch was the single worst poisoner of our political system. I thought the Civil Rights movement was a remarkable manifestation of the human spirit. But now, thanks to our sensible Democratic centrists, I know how wrong I was.

Over the course of the past year, I've finally seen the light. Now I know that Vladimir Putin is behind every malign element in today's political scene. What's more, I've finally realized that Martin Luther King Jr., Malcolm X, Rosa Parks and all those other malcontents who moaned about social and economic and racial "injustice" in America were just dupes -- or agents! -- of the Russians, sowing dissent and disruption in our exceptional land.

With the Russians stirring up all that bother in the Fifties and Sixties, we forgot that we are great because we are good. Any "protest" about US society could only be caused by dezinformatsiya spread by wicked foreigners and their unwitting (or oh-so-witting!) tools. But now, praise God, I'm a good centrist again! If anyone challenges incremental, corporate-funded, hyper-militaristic neoliberalism in any way, I know what to do: Denounce them! And denounce their master, Putin.

I don't have to worry anymore about Murdoch or Mercers or Kochs, about religious cranks or Randian kooks. I don't have to worry anymore about centuries of endemic, deliberately fomented white supremacy used to divide working people from each other so the wealthy few can gorge their fill! I don't have to do the most painful thing of all: look at our actual history and see how Democratic support -- and advancement -- of a rapacious economic system and all-devouring war machine has been absolutely crucial to the decay and disintegration of US society, and the destabilization and impoverishment of the world at large.

No, I'm here to tell you that I have laid that burden down. Now I know that all our troubles, yesterday, today and tomorrow, are due to the eternal machinations of the Russians. (Why, I bet it was the Czar who baited Abe Lincoln and good ole Jeff Davis into the Civil War!) It was Putin who made Bush invade Iraq, establish death squads and institute systematic torture. It was Putin who tricked Bill Clinton into deregulating Wall Street, expanding the death penalty, gutting welfare and killing half a million Iraqi children with sanctions. It was Putin who cannily lured Obama into arming and supporting Saudi Arabia as it killed thousands of innocent people and caused starvation and deadly epidemics in Yemen. And today it's Putin who is behind BLM & NODAPL, behind Antifa, the push for single payer and the Take a Knee campaign. It's Putin who's behind each and every election challenge to corporate-approved Democrats.

Now that I know this, a great weight has been lifted from me. The scales have fallen from my eyes. Now I can say with every decent liberal: Yes indeed, we are great because we are good! Yes, our goodness can never fail; it can only be foiled by our enemies! So no more guilt, no more doubts, no more badmouthing our blessed land! I have thrown off the Russian yoke and can finally sing in the words of the old Negro spiritual, "Free at last! Free at last! Thank God Almighty, we are free at last!"

Related Topic(s): Antifa; Confession; Liberals; Spiritual; Vladimir Putin, Add Tags
Add to My Group(s)
Go To Commenting
The views expressed herein are the sole responsibility of the author and do not necessarily reflect those of this website or its editors.