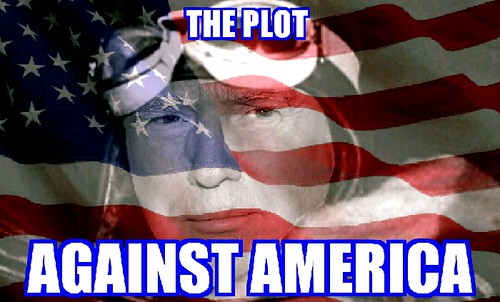 In late 2016, I worked past my embarrassment and had a talk with my teenage son. No, not "the talk" about safe sex, the one about staying safe if political issues boiled over. Donald Trump, behind in the polls, had recently warned that he might not accept the election results, and I knew that he had already called for Americans to rise up in "A REVOLUTION!" twice before after questioning the legitimacy of President Obama's reelection. His once close adviser, even mentor, Roger Stone was now telling millions of his followers that he expected them to block a Clinton inauguration, and predicting that the result would be "a bloodbath." It struck me that a liberal college campus in a conservative state might get sucked into any political violence pretty quickly. So, I did something I could never have imagined doing before: making sure my son knew that if those crazy predictions came true, he could shelter with a nearby relative (who had a sign in front of his house warning that he was heavily armed).

A couple of weeks before the election, I went to an LGBTQ civil rights rally. I stood beside a group of ministers, and someone else spent much of that hour cursing at us and calling for us to die. My best guess is that he was merely mentally disturbed - but that, too, was not an experience I've ever had before or imagined I ever would have.

Soon after that, I put a Clinton-Kaine bumper sticker on my car (out of revulsion at Donald Trump's campaign promise to have our troops murder the wives and children of ISIS members if he won). . . It was my car's first bumper sticker ever. The second day I drove to work after putting it on, just as the polls opened, I was barely able to avoid being run off the road by another driver - and for the first time in my life that seemed deliberate. When I mentioned the incident to half a dozen coworkers, one reported having been given a middle finger in response to her own bumper sticker, and another couldn't believe that I was insane enough to put a political bumper sticker on my car these days, because it was so obviously a bad idea. Perhaps that's why so few people seemed to have put Clinton bumper stickers on their cars in 2016, even though feelings were running much higher - these days, could more people have been afraid to?

I'm a veteran subway rider, but the first time I rode the subway after the election, I found the experience unsettling: I wasn't used to seeing police boarding every car while we were stopped at a station, and checking out its riders. I imagine that was in response to incidents in which several riders in the city had been assaulted soon after the election. All had apparently been beaten because their skin wasn't white enough to make them "real" Americans - and the police would also have been aware that an attack on subway riders in Portland for a similar reason had ended in two murders.

After the election, I had to train myself not to go online for the latest news if it was within an hour or two of my bedtime, because all too often I couldn't sleep well when that news turned out to be too disturbing. . . such as the video of marchers in Charlottesville, some with swastikas and military-style assault weapons, or the video taken when a crowd of people who had dared to protest that were deliberately mowed down by a speeding car. My parents grew up in Germany as Hitler was rising to power, but I'd never imagined uniformed men parading down our own city streets brandishing assault weapons, displaying swastikas while chanting Nazi slogans - and murdering Americans if they objected.

A while after that, I was hiking in a national park and found myself taking a moment to check out each group of hikers I encountered, just in case any seemed agitated and might be talking about a nuclear war. Yet again, I couldn't have imagined that a couple of years previously - but right before I'd left home, President Trump promised North Korea that any further threats like the ones they had been making for months would be met by that country's total destruction, and China's leaders had responded by warning that they would enter the war on North Korea's side if the U.S. launched a preemptive attack. Then, while I was in the park, North Korea detonated its first H-bomb and again threatened to destroy the U.S., and the news was full of speculation about what would happen if the President kept his promise, and how a war could inevitably drag China in. . . Even if I had been confident the President was only bluffing, speculation like that is hard to completely ignore!

I've seen plenty of changes in this country over the past half a century - and actually expected a lot more changes than usual once President Trump was elected - but I never expected that this time those changes would be so deeply disturbing and would even occasionally manage to slip into many of my everyday activities like driving to work, riding the subway, hiking in the woods, or even going to bed. But some changes actually have a much deeper effect, as I'll explain in coming columns. . .

Dagmar Honigmann is in her sixties and has worked as a writer and educator. She is the daughter of German refugees who made separate middle-of-the-night escapes from East Germany after World War II, in her motherâ€™s case with help from an (more...)
Related Topic(s): Campaign Rhetoric; Donald Trump Supporters; President Trump; Right Wing Hate, Add Tags
Add to My Group(s)
Go To Commenting
The views expressed herein are the sole responsibility of the author and do not necessarily reflect those of this website or its editors.

STAY IN THE KNOW
If you've enjoyed this, sign up for our daily or weekly newsletter to get lots of great progressive content.
Series: "The Roots of President Trump's Rhetoric"