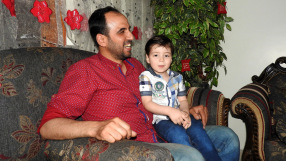 [READ: MintPress Meets The Father Of Iconic Aleppo Boy, Who Says Media Lied About His Son ]

Suddenly we're meant to find credible journalists who embed with al-Qaeda and whitewash their crimes, and media which have on many occasions used photos not even in Syria to accompany sensationalist war propaganda stories.

CNN and western media got it wrong about Omran Daqneesh, but I haven't even seen any retractions for this lie.

And yet the US wants people to believe that the independent voices and Russian and Syrian media who actually reported factually and honestly on these and other issues"are not credible.

The US wants people to live in a fake news bubble, where the narratives are controlled by the war mongers. And, strangely, America seemingly wants Syrians to be subjected to media that reports opposite of the reality they are living. As if after nine years of enduring Western (and Gulf) media's lies Syrians will suddenly believe them and decide to overthrow the president they elected (and support)? America is grasping at straws"

In April 2018, Western media pounced on and promoted the White Helmets' lies, shedding crocodile tears over civilians allegedly exposed to a chemical agent, at the same time ignoring or mocking the testimonies of 17 Syrians from Douma (including the boy starring in the White Helmets' hoax video).

Turns out the body tasked to examine this accusation omitted from its final report key findings that poke massive holes in the (West's) official narrative around Douma. Not one, but many revelations have been leaked about the critical omissions of the OPCW report.

The only ones taking this seriously are mainly Russia, Syria and independent researchers. In the face of these recent revelations, most Western media have largely thus far been silent.

Similarly, Western media didn't cover the December 2018panel detailing damning findings on the White Helmets' association (and membership) with terrorist groups in Syria, and their involvement in staging chemical attacks and in organ harvesting"

In the State Department's quest for truthful reporting, one of the issues to be protected seemingly at all costs is of course the White Helmets (and the chemical hoaxes they help stage).

Anyone who has seriously researched the White Helmets, much less bothered to interview Syrian civilians about the fake rescue group, knows their footage and claims are as credible as the words of nurse Nayirah,Colin Powell, or the entries of Wikipedia.

Journalists who bothered to interview medical staff in Douma following the chemical hoax were told that doctors were treating patients with normal wartime injuries when "strangers" (including White Helmets members) entered yelling about a chemical attack, creating a panic (and demonstrating a lack of medical skills), and filming the scene with then 11 year old Hassan Diab.

Related Topic(s): Fake Media; Fake News; Hoax; Opcw; Syria; Syria Attack; Syria Chemical Attack, Add Tags
Add to My Group(s)
Go To Commenting
The views expressed herein are the sole responsibility of the author and do not necessarily reflect those of this website or its editors.

Life in Russia vs. Russophobic Stereotypes