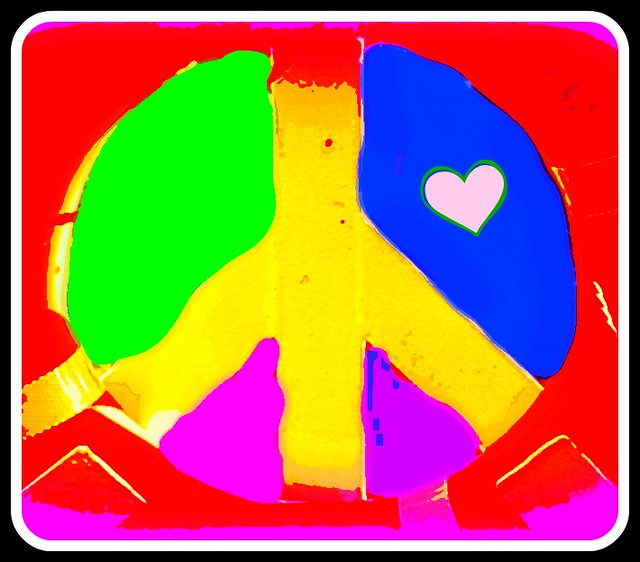 Peace Symbol, 2015 update
(Image by Art&Music*Woo-Hoo)   Details   DMCA
15 Proposals that Could Make Our Nation and the World a Better Place

It has always deeply frustrated me that political writers and activists and third political parties never effectively unite together on anything! Either they can't agree on anything, or if they do agree, they only represent a fringe element in society. This article lists 3 demands that masses of Americans, including some Republicans and Democrats, can agree on right now in order to Maximize Democracy. In a previous article, published at OpEdNews, entitled "What Happens After the Massive Demonstrations in Every City," I elaborate on these 3 demands and what we can do.

Here are the 3 demands that masses of Americans can agree on right now:

1. We demand that corporations not be allowed to make contributions to political campaigns for presidential elections.

3. We demand that the Electoral College System for electing a president be abolished, and that a presidential candidate can no longer become president unless he or she captures a 51-percent majority of the popular vote, using the system of Ranked Choice Voting.
What is needed are massive, nonviolent demonstrations in cities throughout the nation in which demonstrators focus primarily on the above 3 demands until they are implemented into law by the federal legislature. As the movement grows exponentially, any elected official who refuses to support these 3 demands, will be voted out of office. Political organizations that help organize the demonstrations should be allowed to speak briefly about their organizations at each event, but the main, unifying purpose should be to focus on the 3 demands.
This article is primarily about 15 needed proposals that could dramatically improve our nation and the world. Unlike the 3 demands above, these 15 proposals are a hard sell because they primarily address what Americans need, individually and collectively, rather than what they currently want. These 15 proposals will be difficult to adopt because they pertain to how the oligarchs, the wealthiest one percent that controls our government and the mainstream media are still keeping us enslaved. These 15 proposals, though now revised, were originally elaborated on in a longer article of mine published at OpEdNews entitled "We Need Intellectuals More Than Meditators." These 15 proposals are needed if we want the human race to survive, and if we want a sustainable future for our children and grandchildren:
1. Require workplace democracy to allow workers to participate in all the decision making at their place of employment: one person, one vote for all companies that have 5 or more employees. The workplace does not have to be a dictatorship.


2. Provide free health care and free higher education for everyone. The best way to encourage higher learning is to make it free.

3. Dramatically improve public transportation and make the use of buses and trains free within our cities. Expand the use of trains for commercial shipping. Put a moratorium on the production of new cars and trucks on the nation's highways. Place a steep tax on fuel for cars to encourage individuals to use buses and trains. When appropriate, municipalities can use small buses that run more often, instead of using big buses that often have very few passengers. Provide incentives for local production for local consumption to decrease commercial shipping across long distances.
4. Reduce military spending by 90%, and as other countries reciprocate, it can be reduced further. The U.S. will take the initiative in getting all nuclear weapons and nuclear power plants dismantled. The U.S. will bring home all military personnel and close down the government's 700 military bases around the world. "And they shall turn their swords into ploughshares (Isaiah 2:4)." Many of the existing military ships, submarines, and planes throughout the world will be used for low-budget travel and tourism to promote goodwill among nations. With less than one percent of what the world spends every year on weapons, we could put every child throughout the world in school. In 2015, the U.S. accounted for 37 percent of the world's military spending.


The ratio of the highest earning income to the lowest income will be 10:1. This degree of egalitarianism should reduce crime and the need for a large police force in our communities. Here are 11 amazing facts about world poverty. Social problems increase to the degree there is a gap between the rich and the poor within a nation and among nations. If everyone on the planet consumed as much as the average American, it would take 4 earths to sustain them.
The current corporate tax rate has fallen from 35% to 21% in a flat tax system, but large corporations, especially transnational corporations, should pay a much higher percentage of taxes than smaller companies. We can implement some of the corporate tax recommendations of the organization called Americans for Tax Fairness.


6. Phase out the use of fossil fuels in 10 years. Implement the Ecological Sustainability goals of the Green Party, including zero waste policies to the maximum degree possible. However, some Left Greens argue that current Green New Deal proposals are not going far enough to reduce massive growth and neoliberalism.


8. Demand that the Electoral College System for electing a president be abolished, and that a presidential candidate can no longer become president unless he or she captures a 51-percent majority of the popular vote, using the system of Ranked Choice Voting.


9. Abolish the Federal Reserve and allow the Treasury Department to oversee a nationwide public banking system.


10. For medical, therapeutic, spiritual, and recreational reasons: legalize marijuana at the national level and also psychedelics.


12. Allow United States citizens to visit any country they wish. All existing U.S sanctions and embargoes on any country shall be removed.


13. Let the American people vote to determine if they want a Constitutional Convention for a new constitution at every presidential election. If approved by a 51-percent majority of the American people, allow all national political parties that capture at least one percent of the national vote be represented through Proportional Representation at a Constitutional Convention to work together to create a better, updated constitution. One hundred delegates will meet for 3 months, and if they create a new document approved by 51 percent of the delegates (a higher percentage will be even better)--it will be ratified later if a 51-percent majority of the American people approve of the new constitution in a referendum vote. Each of the 50 states can be encouraged to create a new state constitution using this same method.


Here is what I would recommend in a new Constitution for the United States: 1) Encourage state governments to consider implementing Direct Democracy--instead of representative democracy--at the township, city, and county levels. 2) Implement a unicameral federal legislature (after abolishing the U.S. Senate altogether) in tandem with a system of Proportional Representation for electing the one-house federal legislature. 3) Make it much easier to pass future laws and future Amendments in the new Constitution. (I have created a 24-month procedural timeline for creating a new constitution in this document. I have also written a constitution for the United States called the Third Constitution of the United States; our first constitution was the Articles of Confederation.)


14. Eliminate the unfair Security Council of the United Nations and make the General Assembly of the UN more powerful than any nation in order to create a Democratic World Government. The weight of any nation's vote can be determined by its population.


The Earth Constitution (also click here) and other organizations have also proposed models for a Democratic World Government. Dr. Glen T. Martin, the president of the World Constitution and Parliament Association, in this article entitled "This Changes Nothing: A Review of Naomi Klein's book, This Changes Everything: Capitalism vs the Climate" argues that Naomi Klein's recommendations truly change nothing for they recommend transforming the global capitalist system without defanging its militarized ally: the lawless system of nation-states. To read Dr. Martin's article at academia.edu, click here and then scroll down to "Read Paper." Note: In the Preamble of The Constitution for the Federation of Earth, or the Earth Constitution, amended in 1991, it mentions that we are "on the threshold of a new world order," but this is most likely nothing like the type of "new world order" that the first George Bush envisioned when he used the term in a speech to the nation.
15. Encourage the self-determination of local communities whenever possible. Scott Peck, author of the book The Road Less Traveled, shows in this article how to build authentic community. Another way to create cohesive communities is by providing incentives for the neighborhood control of public elementary schools in pilot projects.

Related Topic(s): Community; Democratic; Demonstrations; Egalitarianism; Future; Self-determination; Sustainability; Voting; World Issues; World Peace, Add Tags
Add to My Group(s)
Go To Commenting
The views expressed herein are the sole responsibility of the author and do not necessarily reflect those of this website or its editors.