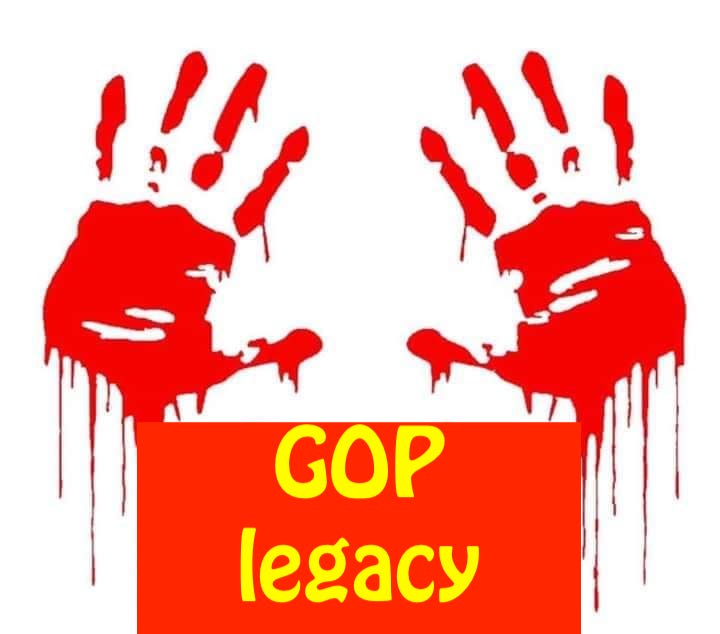 gop legacy
(Image by self)   Details   DMCA
... One, if Trump had not fired the pandemic-response experts we would have had a science-based, effective response! The emergency equipment he has claimed for a couple weeks was already delivered and he had a "hunch" would be more than enough was pure B.S.! The medical workers are still begging for it and dying for lack of it!!

SECOND, it is important to focus on the fact that as Trump blames his catastrophic failure on democrats, Obama and thieving medical workers... the reason we are suffering through this bumbling incoherent response that is causing such unnecessary death, is because republicans refused to honor their oath to protect and defend. The proof was provided that Trump was a corrupt, lying fraud acting like a mob boss! THEY CHOSE TO IGNORE THE EVIDENCE. From the beginning they have ignored the lying, greed and traitorous collusion with Russia. They joined him in calling the free press "fake" and American security agencies the "deep state"! THEY UNLEASHED THIS DISASTER and every unnecessary death is laid on their doorstep! #covid45

Love learning. Hate stupidity and intolerance. First let me say that I am not a professional writer, although I have written a couple of screenplays and even sold one some years ago. I am however a professional actor and a member of the screen (more...)
Related Topic(s): Collusion; Death; Death; Disaster; Evidence; Failure; Fraud; Fraud; Greed; Impeachment; (more...) Incompetence; Lies; Pandemic; Republican; Sedition; Suffering; Traitor; Trump, Add Tags  (less...)
Add to My Group(s)
Go To Commenting
The views expressed herein are the sole responsibility of the author and do not necessarily reflect those of this website or its editors.