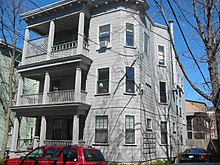 Here are a few numbers NLIHC isn't as eager to talk about:

According to the US Bureau of Labor Statistics, a whopping 1.9% of all American workers, and only 1% of full-time workers, earned minimum wage as of 2019. Also per BLS, minimum wage workers are more likely than average to be employed in food service jobs where wages are often supplemented with tips.

According to the Economic Policy Institute, 60% of workers in the lowest income decile (which would include minimum wage earners) receive public assistance benefits that top off a full-time minimum wage earner's wages by an average of about $1.50 an hour.

And then we come to two assumptions in the NLIHC report that become problematic, especially when combined.

The first assumption is that rent is only "affordable" if it comes to less than 30% of a person's income. But that seems awfully one-size-fits-all. What if spending 35% of my income on rent saves me 10% of that income somewhere else utility bills or gas costs for longer commutes, for example?

The second assumption is that that there's only one earner living in (or at least only one earner contributing to the rent on) the household. That assumption seems especially silly as applied to two-bedroom rentals. In reality, many people share housing. They move in with their romantic partners, or find amicable roomies. Just as many hands make light work, many paychecks make lower per-person rent.

Is the rent, as Jimmy McMillan says, too damn high? In some places, absolutely. In many places, probably.

Who are the geniuses limiting the housing supply with permit schemes, zoning restrictions, and supposed "fair housing" rules, all while pretending they're doing tenants a favor?

The same geniuses who oppress workers with minimum wage laws, licensing requirements, and supposed "labor protections," all while pretending they're doing workers a favor.

Perhaps it's time for America's workers to re-think government as we know it.

Related Topic(s): Housing; Minimum Wage; Renting, Add Tags
Add to My Group(s)
Go To Commenting
The views expressed herein are the sole responsibility of the author and do not necessarily reflect those of this website or its editors.