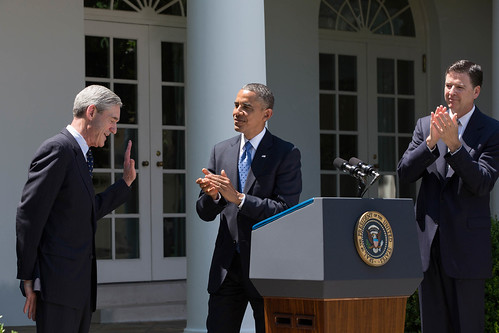 On February 2, US president Donald Trump approved public release of a memo from the US House Intelligence Committee concerning FBI malfeasance in its applications for warrants to surveil Carter Page, a former member of his campaign team.

The following day, Trump triumphantly tweeted that the memo "totally vindicates" him in the ongoing "Russiagate" probe. It doesn't really do that -- proving a negative is always difficult -- but it does add a great deal of credibility to his charge that the probe is a politically driven witch hunt rather than a serious criminal investigation.

According to the memo, the FBI based the probable cause claim in its multiple surveillance applications to Foreign Intelligence Surveillance Court judge on two pieces of "evidence":

1) A "minimally corroborated" (the FBI's own words) dossier of political opposition research on Donald Trump, compiled by a British former spy in the pay of Trump's political opponents; and

2) A Yahoo! News article based -- although the FBI denied it -- on leaks from that same foreign operative.

The memo also claims that at no point did the FBI apprise the judge of the political origins or "minimal corroboration" of the memo.

If these claims are true, then what happened was the equivalent of crazy Uncle J. Edgar going before a judge and using a picture of me with a Frisbee [TM] in the air behind me, taken by my angry ex-wife, as probable cause to believe that I'm from Mars, then asking for a warrant to search my garage for flying saucers.

As you may recall, this is the same FBI which (and the same FBI director who) amassed mountains of evidence that Trump's opponent in the 2016 presidential election had committed multiple felonies in her grossly negligent handling of classified information as Secretary of State, yet recommended against prosecuting her because, well, she's Hillary Clinton.

How many of those 35,434 requests were backed by evidence no more substantial than that described in the Nunes memo?

How much more dumb and evidenceless did those 12 denied requests have to be to not get a pass?

And why did the same Republican Congress which just released this memo recently vote to renew Section 702 of the Foreign Intelligence Surveillance Act, giving even more expansive powers to organizations which have clearly used those powers abusively and without regard to even minimal standards of evidence?

Did Trump and/or his campaign team "collude" with the Russian government to manipulate the 2016 presidential election? I don't know. But I do know that disguising a circus as an investigation isn't likely to shed real light on the matter.

Related Topic(s): FBI; FISA; Fisa Court; Nunes Memo; Trump And Putin; Trump Dossier, Add Tags
Add to My Group(s)
Go To Commenting
The views expressed herein are the sole responsibility of the author and do not necessarily reflect those of this website or its editors.