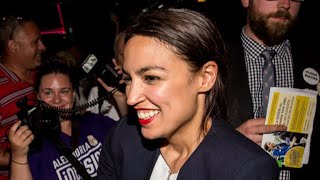 When 28-year-old Alexandria Ocasio-Cortez upset a 10-term incumbent congressman in Queens, New York in a set of Democratic primaries that saw self-proclaimed democratic socialists in the Bernie Sanders mold pick up seats across the country, The New York Times (which, true to its institutional establishmentarianism, didn't bother to cover her campaign) predicted that her victory would "reverberate across the party and the country."

Now the Times' fellow elitist rag The Washington Post is reacting to another round of Democratic primaries. This time, Hillary Clinton-like centrist-corporatists did well. "Signs of a Tea-Party-like movement in the Democratic Party that would throw winnable races to far-left candidates appear to be fading," concluded David Weigel on August 8th.

Has the political world changed that much in six weeks? Of course not.

As Donald Trump said about something else entirely: "What you're seeing and what you're reading is not what's happening."

What we're reading and what is really happening is a big wet dollop of the freakouts we see from American pundits incapable of placing current events within an historical context. After the 1917 Bolshevik Revolution overthrew the czar in Russia, many Americans experienced "a mounting fear and anxiety that a Bolshevik revolution in America was imminent -- a revolution that would change Church, home, marriage, civility, and the American way of Life," Murray Levin remembers in his book "Political Hysteria in America."

After the Soviet Union collapsed in 1991, Francis Fukuyama made bank selling his book "The End of History," arguing that neither communism nor any other alternative to capitalism would ever be viable again. He said we had arrived at "the end point of mankind's ideological evolution and the universalization of Western liberal democracy as the final form of human government." Both were alarmist and wrong: both capitalism and the communist ideal remain and will survive into the foreseeable future.

Then there's my editor at Time magazine who, following 9/11, informed me that no one in America would ever be interested in humor or satire in any form ever again.

It's OK to be shocked by big events. But things usually get back to normal.

For decades the normal within the Democratic Party has been a schism between left progressives (George McGovern, Howard Dean when he ran for president, Bernie Sanders) and centrist-corporatists (Jimmy Carter, Barack Obama, Bill and Hillary Clinton).

As I wrote in my essay for the Wall Street Journal, "Civil War in the Democratic Party": "DNC-approved 'mainstream' presidential prospects have adopted left-leaning positions on a variety of issues. Yet the populist left doesn't trust them, and for good reason. [Kamala] Harris was caught fundraising in the Hamptons; [Cory] Booker is too close to bankers; [Kirsten] Gillibrand may have vested too much in #MeToo; [Oprah] Winfrey is a billionaire arriviste. They're all silent on the working class."

The same dynamic is taking place in local races, where corporate Democratic candidates are adding some Bernie-like policy promises to their campaigns in order to attract the party's leftist base. "The party's establishment has embraced ideas like expanding the Affordable Care Act, shrinking the space between its leaders and its disrupters," Weigel wrote. He quoted Washington Governor Jay Inslee: "Trump has been the great doctor, stitching up our scars and healing us organically."

I doubt it. The evil Trump can't heal what ails the Democratic Party. Though I noted in a different Journal piece the possibility that outsider attacks against the left by Republicans like Trump and James Comey might prompt centrists to defend them, leading to Democratic de'tente, what Weigel is describing is not coming together under a big left-leaning tent but rather the old 1960s conceptual tactic of co-option.

What the DNC and the centrist-corporatists who control it still refuse to accept is that anti-Republicanism -- even anti-Trumpism -- is not now, nor will it ever be, enough to lure the progressive populist left to the polls. Against history, against the 2016 election results, they assume that the default mode of a left-leaning voter is Democratic.

Related Topic(s): Corporate Manipulation; Democrats DNC; Democrats Progressive; Voting, Add Tags
Add to My Group(s)
Go To Commenting
The views expressed herein are the sole responsibility of the author and do not necessarily reflect those of this website or its editors.