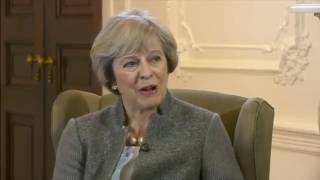 Teresa May on snap election All credit goes to paddypower , a friend of mine isn't on facebook so im uploading it here for hi to see.
(Image by YouTube, Channel: Zoe Barrett)   Details   DMCA

What exactly happened when the people of Britain went to the polls on Thursday to vote for a new prime minister?

As we know the Brits don't vote directly for the PM, they vote for an MP, member of parliament from their "constituency" to represent them in the House of Commons. Each MP belongs to one or another party-Conservative, Labour, Liberal and others. If one party gets 326 MP's voted in that party's leader becomes the PM.

That didn't happen. The Conservative Party of PM Teresa May got only 318 MP's elected so now there's what's called a "hung parliament" [1] taking place.

In any event, as is protocol May as the sitting PM on Friday went to Buckingham Palace to present Queen Elizabeth what's called the "Queens Speech" to formally ask her to form a new government.

Prior to the formality of meeting with the Queen May reached out to the DUP, Democratic Union Party of Northern Ireland-asking them to join her and with the 10 seats they won would effectively get her over the 326 seat threshold.

However this is where things get complicated.

There was no formal "coalition" between May and the DUP only "discussions" to form a new coalition government.

Significantly on Tuesday, June 13 the new parliament meets for the first time. May as the incumbent PM will ask the MP's to approve the "Queens Speech" and according to the " Cabinet Manual" the incumbent "is expected to resign if it becomes clear that it is unlikely he to be able to command that confidence and there's a clear alternative".

So May could get a no confidence vote by the MP's on Tuesday and Labour's Party Jeremy Corbyn whose party came in with 262 seats, could argue there's an "anti Tory"-Conservative-majority in the House of Commons that has rejected May's "Queen Speech" and ask the MP's to support him as PM.

But May could reject the MP's vote on Tuesday soldier on as PM and go it alone as a minority government "vulnerable to being voted down any time trying to win support of other parties on an ad hoc basis for every vote". Such "minority governments rarely last long".

It gets further complicated but for the moment let's leave it at that to see what happens Tuesday when May presents the "Queens Speech" to the MP's and see if they vote it up or down.

What's also looming are the Brexit talks with the EU set to begin on June 19 which could affect how the MP's vote on Tuesday. Even if they vote for her to continue as PM for the time being she'll still have a precarious hold remaining as PM.

For now everything in Britain is far from a done deal.

Retired. The author of "DECEIT AND EXCESS IN AMERICA, HOW THE MONEYED INTERESTS HAVE STOLEN AMERICA AND HOW WE CAN GET IT BACK", Authorhouse, 2009
Related Topic(s): Brexit; Parliament; Prime Minister; Teresa May; Voter Revolt, Add Tags
Add to My Group(s)
Go To Commenting
The views expressed herein are the sole responsibility of the author and do not necessarily reflect those of this website or its editors.