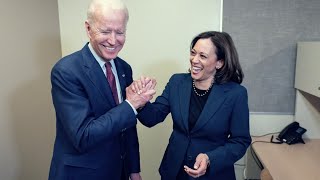 Kamala Harris | Vice President Announcement | Joe Biden For President 2020 Kamala Harris is the daughter of proud immigrants--a mother from India and a father from Jamaica--who raised her to take action. That's exactly what this ...
(Image by Biden campaign)   Details   DMCA

Here's a riddle for you: How is Joe Biden- who has a long record of pushing through legislation that mostly targets black men- going to get African Americans to swarm the polls to vote for him on November 3?

Answer- He's going to choose a hard-nosed, mixed-race female prosecutor -who oversaw the mass incarceration of hundreds of black men- as his running mate. That's how Biden is going to win the election.

Can you see the problem with this strategy?

As we all know, the Democrats have moved heaven and earth to make the upcoming election about race. The Dems are obsessed with race. For them, everything is race, race, race. They don't want to talk about the issues that the American people really care about (In January, Gallup conducted a survey that identified the issues that Americans care most about. The top 10 were Healthcare, Terrorism, Gun Policy, Education, the Economy, Immigration, Climate Change, Abortion, Wealth Distribution, and the Budget Deficit.) because they have no intention of doing anything about them. And, they're not going to reach out to poor, working-class whites, because then they'd have to roll back the trade deals that moved millions of jobs overseas and flooded the country with illegals. They're not going to do that because they're deep-pocket contributors would never allow it. So, basically, they're stuck with race, an issue that didn't even appear on people's radar before the George Floyd incident, but is now headline news on an almost daily basis. Why is that?

Well, it's because the Party leadership thinks that race is an issue on which Trump is particularly vulnerable, thus, the corrupt media has inflated the Floyd death into a transformational moment in American history (on a par with Pearl Harbor or 9-11), in order to create the fractious and emotionally-charged political environment the Democrats want to beat Trump and seize power. So, just as the 3-year Russiagate hoax was about seizing power, and the failed impeachment proceedings were about seizing power, and the manipulations of the Coronavirus policy were about seizing power (Democrat governors ordered lockdowns that destroyed the economy.), so too, the Floyd incident is being used to exacerbate racial antagonisms to further demonize "evil" Trump and pave the way for a Biden victory in November. It's all about power.

But- as we mentioned earlier- there are some glaring holes in the Democrat strategy, the most obvious of which is Biden's sizable role in creating the modern-day mass incarceration state. It was Biden who concocted and shepherded through Congress many of the laws that disproportionately target young black men. Here's a bit of background from an article in the New York Times:

"(Biden) now plays down his role overhauling crime laws with segregationist senators in the '80s and '90s. That portrayal today is at odds with his actions and rhetoric back then"In September 1994, as President Bill Clinton signed the new Violent Crime Control and Law Enforcement Act in an elaborately choreographed ceremony on the south lawn of the White House, Joseph R. Biden Jr. sat directly behind the president's lectern, flashing his trademark grin.

" for Mr. Biden, the moment was the culmination of his decades-long effort to more closely marry the Democratic Party and law enforcement, and to transform the country's criminal justice system in the process. He had won.

"The truth is," Mr. Biden had boasted a year earlier in a speech on the Senate floor, "every major crime bill since 1976 that's come out of this Congress, every minor crime bill, has had the name of the Democratic senator from the State of Delaware: Joe Biden."" Now" he must answer for his role in legislation that criminal justice experts and his critics say helped lay the groundwork for the mass incarceration that has devastated America's black communities...

Mr. Biden's relationship with (segregationist, Strom) Thurmond" who became his co-author on a string of bills that effectively rewrote the nation's criminal justice laws with an eye toward putting more criminals behind bars. In 1989, with the violent crime rate continuing to rise as it had since the 1970s, Mr. Biden lamented that the Republican president, George H. W. Bush, was not doing enough to put "violent thugs" in prison. In 1993, he warned of "predators on our streets.""

"It doesn't matter whether or not they're the victims of society," Mr. Biden said in 1993, adding, "I don't want to ask, 'What made them do this?' They must be taken off the street.""

Over the next decade - first with Mr. Thurmond as chairman and then Mr. Biden after Democrats won back the Senate in 1986 - the pair wrote roughly a half-dozen crime bills together, laying the groundwork for three of the most significant pieces of crime legislation of the 20th century: the Comprehensive Crime Control Act of 1984, establishing mandatory minimum sentences for drug offenses; the 1986 Anti-Drug Abuse Act, which dictated much harsher sentences for possession of crack than for powder cocaine; and the Violent Crime Control and Law Enforcement Act of 1994, a vast catchall tough-on-crime bill that also included money for prevention, including Mr. Biden's signature initiative, the Violence Against Women Act.

In other Senate floor speeches in 1993 and 1994, Mr. Biden spoke openly of wanting"to rid Democrats of their reputation of being soft on crime"... there is also evidence that it contributed to the explosion of the prison population. Biden aides and supporters often note that the trend toward mass incarceration began much earlier, in the 1970s, and that states - not the federal government - house an overwhelming majority of the nation's inmates." ("'Lock the S.O.B.s Up': Joe Biden and the Era of Mass Incarceration", New York Times)

Let's summarize. Biden either authored of pushed through various anti-crime legislation including:

writer
Related Topic(s): 2020 Elections; Biden Harris; Presidential Election 2020, Add Tags
Add to My Group(s)
Go To Commenting
The views expressed herein are the sole responsibility of the author and do not necessarily reflect those of this website or its editors.

How do the Democrats benefit from the nationwide Black Lives Matter protests?

Will fewer Blacks vote for "Jailer Joe" Biden than Hillary??