By Robert Weiner and Kyra Watts 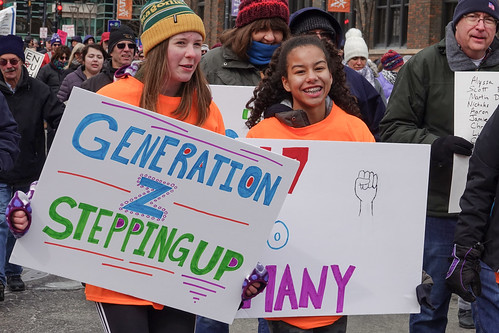 According to the U.S. Census Bureau, the 2018 election saw a 79% increase in voter turnout among people ages 18 to 29 years old compared to the 2014 congressional elections. This is a major improvement over the traditional non-participation by young voters. We're constantly questioning why younger generations are lacking enthusiasm when it comes to voting. Big challenges remain. Generation Z, those born between 1995-2015, has experienced many traumatic instances, whether directly or indirectly, throughout the years. Just to name a few"

All of these events were nationally broadcast and many sparked reactions all over the country, some violent, some not. The evolution of our nation's technology has blessed us with the ability to share information in seconds from just about anywhere in the world, but this blessing is bittersweet. With that ability came the recurring reminder of all of the tragedies that were taking place in this country during such a short time period.

The key question for Election 2020 is, will Generation Z vote or have they lost faith from inaction and opposition on police reform, climate change, health, gun control and women? Do they see hope in changes at the top-- at the White House and the Senate? What about elections at every local level?

How can we expect the country's young people to want to be involved when they've witnessed or been made aware of such tragic events and never saw any action-based ramifications? They see people their age dying due to gun violence from other kids, adults and even police officers, but then they see their government officials and police arguing for keeping choke holds and immunity the same. How can we expect them to believe that the government is truly for the people if they feel like they haven't experienced it?

We have to encourage a look at our American History. There have always been laws in this country and not all citizens agreed with the laws in place, but they didn't just sit back and stay silent. There were protests. Citizens used these protests to seek attention from their government and to express their concerns.

In 1773, American colonists dumped 342 chests of tea into the Boston Harbor to protest "taxation without representation". We know this as the Boston Tea Party. In 1963, Martin Luther King Jr. led the March on Washington for jobs and freedom to draw attention to the racial discrimination of African Americans in this country. In 1993, roughly 800,000 people gathered to march for LGBTQ Rights in Washington, D.C. In 2003, millions of people marched in cities across the world to protest President George W. Bush's decision to invade Iraq.

We've always had to make adjustments to legislation because we as Americans are constantly evolving, but the one thing that hasn't changed is the effective method of protesting. Our voices are louder together than they are separate. We see that now with the clear power to draw attention to everything going on in this country.

People's voices are finally being heard -- not because no one was listening, but because everyone started speaking out together. Citizens of this country need to start utilizing our first amendment rights more often, not less, despite the White House brutality against protesters from Lafayette Park to the streets of Portland, Oregon - and from Black Lives Matter to March for our Lives against mass murders in schools.

We are the ones that have to live and work in this country. Why not fight for what we want with the tools that we have? We have our voices and the right to vote. Those two shouldn't be taken lightly, because together they can both help evoke change throughout this country. But we can't put all of the responsibility on the people. Our government needs to continue to listen and make changes for the betterment of our nation for all of our citizens.

Protestors are calling for social reform. Since the Black Lives Matter protests that began earlier this year, confederate monuments are being taken down all over the country, companies are taking a stance and speaking out in support, police reform has taken some baby steps and officers have been arrested for the murder of George Floyd. This is only the beginning.

The message of the great, just departed John Lewis, who strongly supported the Constitutional amendment giving youth the vote as well as full voting rights for all minorities, was persistence. We can continue to make this country a better place for ourselves and generations to come, but we have to be willing to put in the work if we the people want to continue to see results.

Robert S. Weiner was a Clinton and Bush White House spokesman, spokesman for the House Government Operations Committee, senior staff for Congressmen John Conyers, Charles Rangel, Edward Kennedy, Ed Koch, and Claude Pepper and He was was Youth Voter Registration Coordinator for the Democratic Party at its Watergate Headquarters in 1971 and 1972, following the Constitutional Amendment giving 18 year-olds the votr. Kyra Watts is Policy Analyst for Robert Weiner Associates and Solutions for Change. She is Journalism Major, Class of 2021, at Florida A&M University in Tallahassee and a member of generation Z.