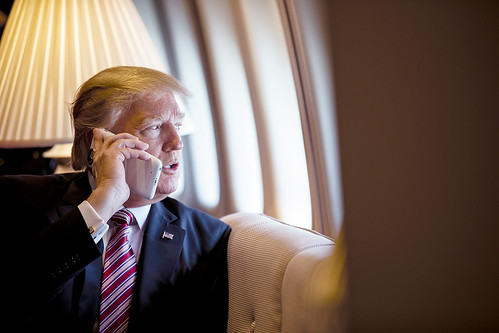 With Mueller's History as Institutional Protector, Special Counsel may charge Trump as "Unindicted" for Obstruction but associates for election law, money laundering violations and obstruction. Law Explicit Not to Solicit Value from Foreign Government in Election, Exactly What Trump, Jr. Memo Asked. With the interview of AG Sessions and twenty White House advisors completed, it's clear the pace of special counsel Robert Mueller's investigation into Russian interference in the 2016 election is rising to a crescendo.

By Robert Weiner and Kyle Fleck

It's important to note Mueller's history as an institutionalist. To protect the institution of the Presidency, he may call Trump an "unindicted" co-conspirator for obstruction, paralleling the special prosecutor's charges against Richard Nixon in Watergate. He may do the same with violation of federal campaign law and money laundering.

But he's shown he won't be so kind to the people in Trump's orbit. After indicting former campaign manager Paul Manafort, coaxing a guilty plea out of former national security advisor Michael Flynn, and flipping campaign adviser George Papadopoulos into a collaborative witness, Mueller's moved to communications director Hope Hicks, former chief strategist Steve Bannon and Trump himself. Mueller is building a real obstruction of justice case against various members of the Trump administration, including the President.

Ty Cobb, Donald Trump's lead attorney, has a habit of making rosy predictions for when special counsel Robert Mueller will be wrapping up his inquiry into possible Russian collusion in the 2016 election. With the interview of AG Sessions and twenty White House advisors completed, Mueller is now scheduling interviews of Trump's closest associates, and the President himself. Trump says he "couldn't care less" about Russian interference during the election and will "absolutely" talk to Mueller under oath in "two or three weeks," and it's clear the pace of the investigation is rising to a crescendo.

With a history as an Institutional protector, he may wind up naming Trump himself only as an "unindicted" co-conspirator, but charge Trump associates with obstruction of justice, election law foreign "solicitation of value", and international and domestic money laundering. But yes, the investigation may culminate soon, in weeks (thought the indictments will take far longer to process).

The latest act that Mueller will look at when building his obstruction case will be the push to release a memo written by Devin Nunez (R-Ca.) Chairman of the House Intelligence Committee. Trump's latest push, to release the Nunes cherry-pickings memo despite the DOJ virtual "cease and desist" letter, where Assistant Attorney General, Stephen Boyd, emailed Nunes not to release the memo, saying the release would be "extremely reckless," is just more obstruction-- and Mueller will see it that way too. He'll also see it as a violation of classified regulations.

While the recent news of Trump ordering Mueller fired last June is something of a red herring -- he backed off following the strong advice of his White House lawyer--the fact is he did back off. There are much stronger indicators of obstruction of justice by the President and his administration, which Mueller will cite. But it may not be as full blown as many Democrats hope. In order not to besmirch the office of the presidency, he may well conclude that Trump himself had no willful intention to break the law against conspiracy with a foreign power in an election.

It's important to note Mueller's history as an institutionalist. In his recent stint investigating Ray Rice and domestic abuse for the NFL, Mueller left the league itself for past offenses alone and made suggestions for future improvements. To protect the institution of the Presidency, he may call Trump an unindicted co-conspirator for obstruction, paralleling the special prosecutor's charges against Richard Nixon in Watergate. He may do the same with violation of federal campaign law, and money laundering.

But he is showing he will not be so kind to the people in Trump's orbit. After indicting former campaign manager Paul Manafort, coaxing a guilty plea out of former national security advisor Michael Flynn, and flipping campaign advisor George Papadopoulos into a collaborative witness, Mueller moved to communications director Hope Hicks and former chief strategist Steve Bannon. It seems apparent that Mueller is building a real obstruction of justice case against them and possibly unindicted co-conspirator against Trump.

After firing FBI director James Comey in May of last year, ostensibly for "mishandling" Hillary Clinton's use of a private server for her e-mails, Trump admitted to NBC's Lester Holt the true reason: "When I decided to [fire Comey], I said to myself" you know, this Russia thing with Trump and Russia is a made-up story." This was two days after bragging about Comey's dismissal to a pair of Russian diplomats in the Oval Office, saying, "[h]e was crazy, a real nut job. I faced great pressure because of Russia. That's taken off."

At the height of the presidential campaign in June 2016, Donald Trump, Jr. agreed to schedule a meeting with Russian nationals, promising in an email "very high value and sensitive information" regarding Clinton and her associates. "If it's what you say, I love it," Jr. replied to his Russian contact, before inviting Manafort and Trump's son-in-law Jared Kushner to participate This is in direct violation of federal campaign law, which in Section 110.20 states one may not solicit from "foreign national" a thing of value, or expressly or impliedly" a contribution or a donation, in connection with any Federal, State, or local election." Many have fantasized about the never-enforced Logan Act, which bars negotiations between citizens of the U.S. and agents of foreign power. But the Federal Election Act is regularly enforced. For this reason, Steve Bannon's prediction that investigators will "crack Don Jr. like an egg" may come true.

Following the election, President Trump decided it was time for damage control. Flying back from the G20 summit aboard Air Force One in July 2017, he helped dictate a press release downplaying the importance of the Don Jr/Manafort/Kushner Trump Tower-Russia meeting, leaving any mention of seeking campaign dirt from the Russians conveniently absent, and saying it was all about "adoptions" of Russian children.

It would be surprising if Mueller does not paint a portrait of knowing duplicitousness and obstructive behavior by Trump, his family, and campaign and administration teams. Not only were Don, Jr. and company attempting to obtain "high value" damaging campaign information from agents of a foreign government, they willfully lied after the fact to cover their tracks.

Judging by his comments, the President still seems unclear on the law. In his press conference in Chief of Staff John Kelly's doorway January 24, he was asked if there was collusion. He responded: "No collusion, no obstruction."

Then, when asked "What is collusion?", he responded with this astounding analysis under-reported by media: "Collusion is obstruction." No, Mr. President, in legal terms, collusion is conspiracy. "Obstruction" is taking steps to block or interfere with a legal investigation.