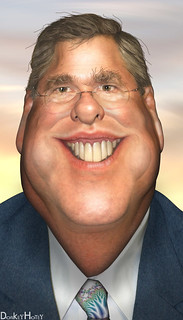 Jeb Bush - Caricature
(Image by DonkeyHotey)   Details   DMCA
Little noticed among Jeb Bush's recently released emails, published on jebemails.com, is this one (Dec. 6, 2000) offering thanks to his brother's future Supreme Court Chief Justice Appointee, John Roberts, for legal advice during the election. "Thank you for your time today. I really appreciate your input on my role in this unique and historic situation," he wrote.

If Bush wants to run for the Presidency in 2016, he should answer questions about his involvement, and media should fact-check and obtain the truth.

Jeb Bush may have a problem in the primaries with his family name because of his father and brother's legacies of the Iraq war and the 2008 recession -- issues that may have been handled very differently in a Gore presidency-- and now attempts to distance himself from them with the widely covered "I'm my own man." The media has not, however, even mentioned what may be his biggest problem: his level of responsibility in Florida for taking the 2000 election from Gore, and the national repercussions.

Gov. Bush's communications director in July 2001, Katie Baur, said, "While he recused himself from any involvement in what happened after Nov. 7, he did not recuse himself from his role as a brother." What's not known is that the level of direct involvement was, frankly, enormous. The Los Angeles Times reported on July 14, 2001, "The Florida governor's office in Tallahassee made 95 telephone calls to the George W. Bush presidential campaign, its advisors, lawyers and staffers during the 36-day recount period, records show. At least 10 calls came from an office number used primarily by Jeb Bush."

At least one call from Jeb Bush's number "went to Karl Rove, his brother's campaign strategist... One went to the Texas governor's chief of staff, Clay Johnson. Additional calls were logged to cell phones assigned to Bush campaign staffers."

Bush emailed in July 2001: "I have no clue what these calls were about." He had "no clue" of what his own calls were about while his brother was on the cusp of winning or losing the Presidency?

Even before the recount, Florida officials were aware of flaws in the voting system that Katherine Harris, the Secretary of State under Governor Bush, directed. Harris was Co-Chair of the Bush campaign, itself a likely conflict of interest for the state's top voting procedures official.

"There emerges a confluence of circumstances that indicates intimidation and harassment of the Florida voters, and that was set in motion long before the November election," said Commissioner Victoria Wilson of the U.S. Commission on Civil Rights in their report, "Voting Irregularities in Florida During the 2000 Presidential Election." Issued June 8, 2001, the report accuses Florida election officials of "gross dereliction" and "injustice."

The report adds, "This overall lack of leadership in protecting voting rights was largely responsible for the broad array of problems in Florida during the 2000 election."

To this day, Bush has not updated his "no clue" statement, but current presidential voters including in the Iowa Caucuses deserve answers. The actions were only 15 years ago and have impacted the economy and Iraq to this day. Until Jeb says what he did (if anything) to slow walk the count so that Gore would lose by a U.S. Supreme Court stop of the counting, there is reason for voters to question his role, and to factor that role into their voting this time around.