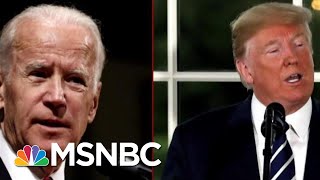 Recently, a contributor to a Facebook group to which I belong asked members if they could give some reasons to vote for Joe Biden "without mentioning Trump."

My initial reaction (admittedly a bit sarcastic) was to comment: "Why?"

Upon further thought, I have decided my initial reaction was correct. In my opinion, there is no reason this year to quibble over issues. The only compelling issue in this presidential election is to remove from office the man who has made a mockery of everything Americans used to like to brag this country stands for. Donald Trump.

Truthfully, any of the candidates who sought the Democratic nomination for president would be acceptable to me over Trump. Biden, the presumptive Democratic nominee, is more than qualified, having served as a vice president to Barack Obama for eight years and in the U.S. Senate before that. What Biden's views are on Medicare-for-all or global warming or income disparity do not matter to me in the sense that he actually understands those issues and knows how to work with people to achieve a consensus while the one-who-shall-not-be-mentioned has encouraged people to take bleach to fight off COVID-19, then announced he was taking an unproven and occasionally lethal drug for the same purpose, counter to the medical advice of virtually every doctor in the world. His personal doctor came up with some Mickey Mouse reason just to keep his job.

So, really? What do I like about Biden? For starters, he won't tell me to drink bleach.

And here's another thing if Democrats learn to stick together for the future of the country, they will in all likelihood also regain control of the Senate, removing Mitch McConnell from the majority leader post he has used to enrich himself and other Republican senators and donors while allowing the unnamed one to do the same while escaping any consequences for a long list of illegal, unconstitutional, immoral and just plain stupid actions.

Indeed, McConnell has been the worst actor in this horror show of a government because he could have stopped it at any time but hasn't. Republicans, having lost their minds in 2016 (along with a lot of non-Republicans) with their presidential choice, have now lost their souls and any claim to being a respectable political party.

What is astonishing to me is how deep the hold of the fear of retribution from national Republican leaders goes on a local level. The silence from local Republicans regarding the bleach-pushing, woman-hating, racist, narcissistic con man in the White House is beyond deafening. Private complaining doesn't count if you're a public official.

Why Biden, you ask? How about this evangelical preachers don't like him. They love the other guy. At least they say they do. I say they deserve each other. Everything about them is false and self-serving. They prey upon the desperate and gullible.

Case in point Norma McCorvey. Until a couple of days ago, few people knew that name. But millions knew her as Jane Roe of the Roe v Wade 1973 Supreme Court decision. As it happens, I recently wrote about her in a column about "famous" people I have met. She was perhaps the most unknown famous person in my experience. She visited the newspaper I was working for in her campaign to undo the court ruling which gives a woman the right to control her own body and choose to have an abortion.

McCorvey, who died in 2017, was going around the country in the mid-90s saying she had changed her mind, had become a Christian, had unbecome a lesbian and was now opposed to abortion. I don't remember being particularly impressed with her professed change of heart and mind and sexual preference. Well, it turns out she was lying. In what she called a "deathbed confession" in a recently released movie, "AKA Jane Roe," McCorvey says she was paid by conservative evangelical preachers to say she had changed her mind and was no longer pro-choice. Paid nearly half a million dollars to say so. She said, "I think it was a mutual thing. I took their money and they took me out in front of the cameras and told me what to say."

McCorvey's life had been a series of being used and abused. She was homeless and too poor to afford an abortion back in the '70s when she became the symbol of the pro-choice movement. In the '90s, she was still needy, but more media savvy. The money looked good to her. Evangelicals followed their script: If you don't have right and decency on your side, lie. Lie to raise money. Raise money to lie. Lie to raise more money, etc.

Evangelicals say they love Trump. It's a lie of convenience. He knows it and accepts the benefits he can reap from it. Their "deal" is pathetic and transparent, yet it has swindled millions of dollars from gullible believers