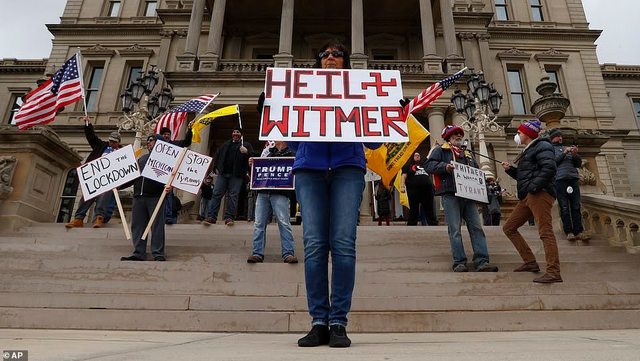 The 2020 presidential election is fast approaching, and Donald Trump can probably count on at least some of the 46 percent who approve of him voting for him.

But as the coronavirus and the COVID-19 disease that manifests from it metastasizes through the country, the very base Trump depends on to defeat former Vice President Joe Biden might not be in any shape to cast their ballots come election day.

Wealthy right-wing donors are ginning up thousands of Trump supporters across the country to participate in protests opposing (Democratic) governors' stay-at-home orders.

And they aren't practicing social distancing.

As The Daily Beast reported:

"A protest movement is taking hold targeting states that have extended social-distancing rules, closed schools, and restricted access to large religious gatherings. And it's being fed by loyalists and political allies of President Donald Trump."

Trump is, of course, encouraging this militia behavior.

On Friday, he tweeted "LIBERATE MINNESOTA!"

He tweeted similar incitements for Virginia and Michigan.

This could get violent, and the President of the United States is gleefully encouraging it.

But if all these Trump supporters mill about eschewing the measures put in place to "flatten the curve," they are putting their own well being at risk, let alone everyone else's.

By egging them on, Trump is potentially thinning his electoral herd.

That herd is helping Trump and his conservative allies try to prevent a dire prediction that the president has only one month to salvage re-election prospects after an NBC News-Wall Street Journal poll reported a majority of American voters disapprove of his handling of the coronavirus, and feel he did not take warnings of it seriously when he was advised of its consequences as early as November.

Related Topic(s): Corona Virus Coronavirus Covid-19; Cult; Health; Protest; Sacrifice; Trump; Trump Rally; Trump Threats; Trumpism, Add Tags
Add to My Group(s)
Go To Commenting
The views expressed herein are the sole responsibility of the author and do not necessarily reflect those of this website or its editors.