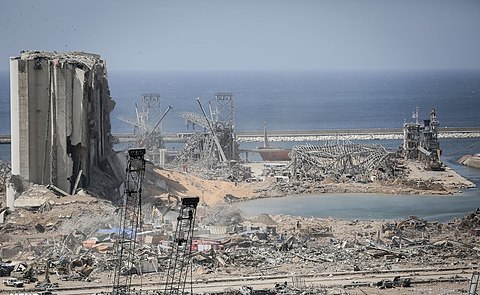 The narrative that the Beirut explosion was an exclusive consequence of negligence and corruption by the current Lebanese government is now set in stone, at least in the Atlanticist sphere.

And yet, digging deeper, we find that negligence and corruption may have been fully exploited, via sabotage, to engineer it.

Lebanon is prime John Le Carre' territory. A multinational den of spies of all shades - House of Saud agents, Zionist operatives, "moderate rebel" weaponizers, Hezbollah intellectuals, debauched Arab "royalty," self-glorified smugglers - in a context of full spectrum economic disaster afflicting a member of the Axis of Resistance, a perennial target of Israel alongside Syria and Iran.

As if this were not volcanic enough, into the tragedy stepped President Trump to muddy the - already contaminated - Eastern Mediterranean waters. Briefed by "our great generals," Trump on Tuesday said: "According to them - they would know better than I would - but they seem to think it was an attack."

Trump added, "it was a bomb of some kind."

Was this incandescent remark letting the cat out of the bag by revealing classified information? Or was the President launching another non sequitur?

Trump eventually walked his comments back after the Pentagon declined to confirm his claim about what the "generals" had said and his defense secretary, Mark Esper, supported the accident explanation for the blast.

It's yet another graphic illustration of the war engulfing the Beltway. Trump: attack. Pentagon: accident. "I don't think anybody can say right now," Trump said on Wednesday. "I've heard it both ways."

Still, it's worth noting a report by Iran's Mehr News Agency that four US Navy reconnaissance planes were spotted near Beirut at the time of the blasts. Is US intel aware of what really happened all along the spectrum of possibilities?

Security at Beirut's port - the nation's prime economic hub - would have to be considered a top priority. But to adapt a line from Roman Polanski's Chinatown: "Forget it, Jake. It's Beirut."

Related Topic(s): Beirut; Explosion; Lebanon, Add Tags
Add to My Group(s)
Go To Commenting
The views expressed herein are the sole responsibility of the author and do not necessarily reflect those of this website or its editors.