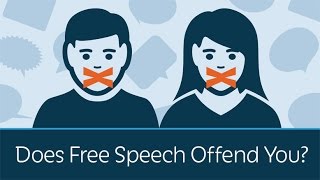 Americans have a Constitutional right to freedom of speech. Right? That's what we're taught in school, at least. That's what a lot of us believe. But we don't really have a completely uninhibited right to freedom of speech. The conventional wisdom is that Americans are free to say anything they want (short of yelling "fire" in a crowded theater) except with very specific exceptions. For example, the Supreme Court has ruled that one exception is "advocacy of the use of force when it is directed to inciting or producing imminent lawless action." You can thus advocate violence, just not violence to begin right now. Other exceptions include obscenity, child pornography, encouraging suicide, and (commercial) speech owned by others.

What happens, then, when a person vents on Facebook or in the comment section of a newspaper's website? There's no threat of immediate violence, so it's legal, right? It's not legal, according to two of America's police departments.

Look at example number one. James Ross, 20, is a gun control supporter and is active on Facebook. One day a friend of his posted a meme on Facebook entitled, "Why I Need a Gun." Below the title were photos of various firearms and an explanation of what each could be used for. The shotgun, for example, was for "burglars and home invasions;" the rifle and scope were for "putting food on the table;" and the assault rifle was for "self-defense against enemies foreign and domestic, for preservation of freedom and liberty, and to prevent government atrocities." Ross didn't like the meme, so he wrote in the comment section, "Which one do I need to shoot up a kindergarten?" He then went to bed.

The original poster deleted Ross's comment and the post, but not before a Facebook friend forwarded it to another friend who happened to be a cop. That cop in turn forwarded it to two more cops who, without conducting any investigation whatsoever, showed up at Ross's place of employment the next day and arrested him for "disturbing the peace," a misdemeanor. Ross attempted to explain himself, but the police were having none of it. They read him his Miranda rights and locked him up for four days.

The county prosecutor quickly dropped the charges, but Ross sued the police, saying that his civil rights had been violated. He hadn't posed any threat to anybody and the police knew it. A federal district court judge, however, threw the suit out, writing that the police had "qualified immunity" that prohibited private citizens from suing them while they were in the process of carrying out their duties. An appeals court, however, recently reversed the district court, saying that the officers could not have qualified immunity because Ross's post was not a "true threat" and the police had not carried out even "minimal investigation." It was a close call for Ross and for the rest of us.

The basis of the judgment was the First Amendment. Ross had not met any of the criteria for controlling his freedom of speech. It was as simple as that. The cops knew it, but charged him anyway. The judge did the right thing.

Similarly, Robert Frese, 62, of Exeter, New Hampshire, had an ongoing problem with one local police officer after being arrested and convicted of purposely running over a highway construction flagger. He allegedly shouted at the man, "If you don't move out of my way, I'm going to run over you," before doing just that. He was convicted of felony assault and sentenced to two-to-four years in prison, with all but 67 days suspended. He was later accused of stalking the officer who arrested him and, later still, of rummaging through a private garbage dumpster, apparently looking for information on the cop.

When the officer retired, a story that was carried in the local paper, Frese took to the online comment section and wrote, "Chief (William) Shupe covered up for a dirty cop." Frese was arrested the next day and charged with "criminal defamation of character," a class B misdemeanor. Frese maintained that the police just wanted to silence him because even a misdemeanor conviction would send him to prison for the remainder of the two-to-four years on the assault charge.

The American Civil Liberties Union (ACLU) saw the case in a completely different way. Two weeks ago, the ACLU filed a federal suit against the Exeter Police Department arguing that the criminal defamation law violates the First Amendment. The suit says that the Supreme Court recognized in a landmark 1964 decision, New York Times v. Sullivan, "the profound national commitment to the principle that debate on public issues should be uninhibited, robust, and wide open, and that it may well include vehement, caustic, and sometimes unpleasantly sharp attacks on government and public officials." Indeed, the Court added, the complaints didn't even have to be true to still be legal.

Related Topic(s): ACLU; Firearms; Freedom; Liberty; Police; Speech, Add Tags
Add to My Group(s)
Go To Commenting
The views expressed herein are the sole responsibility of the author and do not necessarily reflect those of this website or its editors.