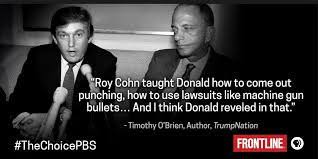 AOL is a legal defense service for refugees seeking asylum mostly from gang-rule in Mexico and Central America. The emigrants want escape from countries whose police forces and allied power holders are controlled by ruthless drug rings whose only goal is accumulation of money and social dominance.

As I did my work helping clients fill out endless forms concocted by those who would illegally exclude them, everything seemed so hopeless. I wondered how those gangs achieved such power? Isn't it a shame, I thought, that entire countries are now controlled by criminal mobs with names like "MS 13," "Nueva Generacion," and "18?" How sad for these people!

Then, during my flight home to Connecticut, I happened to watch the documentary "Where's My Roy Cohn?" (WMRC). It introduced viewers to the dark and criminal mentor of Donald Trump. 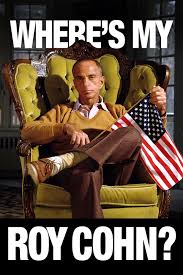 On its face, the film illustrated the absolute corruption of the U.S. government as the unwavering servant of the elite as the only people who count. But in the light of my experience in Tijuana, it made me realize that our country too is literally controlled by shadowy gangs to an extent even worse than what's happening south of our border. I mean, the United States of America now has the most prominent protege of Roy Cohn, an unabashed mafioso, actually sitting in the Oval Office! Both Cohn and, of course, his disciple turn out to be absolute nihilists without principle or any regard for truth.

The film made clear how both men tapped into a similar nihilist strain within huge numbers of Americans who identify with the Republican Party and ironically with the Catholic faith and Christian fundamentalism. Nonetheless, WMRC wasn't explicit enough in probing either Cohn's corruption, that of Donald Trump or of our reigning system's complex of government, education, church and mainstream media.

It failed to show how the phenomena of Roy Cohn and Donald Trump represent mere surface indications of a profoundly anti-democratic coup d'e'tat that has gradually unfolded in our country over the last 40 years. The actuality of this takeover was revealed most clearly in the recent impeachment proceedings. They provided a kind of last straw undeniably exhibiting how nihilist "Christians" have seized power in perhaps irreversible ways.

To see what I mean, begin by watching "Where's my Roy Cohn?" for yourself. It not only details Cohn's life as an infamous New York mafia consigliere. It also shows how he started his career in crime as the 23-year-old advisor of the equally villainous Senator Joseph McCarthy of Wisconsin. (McCarthy, of course was the force behind the nation-wide communist scare of the early 1950s.)

However, most importantly WMRC describes the film's subject as the mentor of Donald Trump. By both their admissions, each recognized in the other a kindred spirit. Each used mafia and friends in high places (from Ronald Reagan to New York's Cardinal Spellman) to enrich himself in terms of power and money. In the end, the alliance brought Trump to "the highest office in the land."

In the course of the film, witnesses testify that Cohn taught Trump his basic approach to life. To wit: here are Cohn's (and by extension, Donald Trump's) implicit Ten Commandments. They also summarize the guiding principles of perhaps the majority of the most prominent politicians in the U.S. and across the world:

All of that was actually Cohn's personal ethos. It worked for him throughout his life. It is reaping at least short-term benefits for Donald Trump as well. In fact, with Cohn as his mentor and as the man's protege, Donald Trump would seem to merit all the adjectives on the film's cover envelope: ruthless, unscrupulous, powerful, flamboyant, notorious, despicable . . .

Related Topic(s): Blackmail; Coup; Deceit; Democracy; Gangs; Impeachment; Mafia; Mobsters; Pedophiles; Trump, Add Tags
Add to My Group(s)
Go To Commenting
The views expressed herein are the sole responsibility of the author and do not necessarily reflect those of this website or its editors.