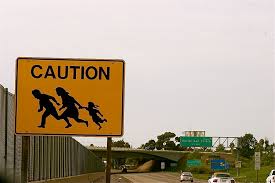 In recent weeks, I've been trying to report on my rich but heartrending experiences in Tijuana Mexico where I'm volunteering for a legal services group, Al Otro Lado (AOL). We offer professional counseling and support to refugees at our country's heaviest border crossing point here in Baja California. For someone in his 80th year, workdays here have been incredibly busy, very exhausting, but also extremely rewarding.

I mean, who wouldn't be edified to witness the example of the heroic but impoverished fathers and mothers AOL counsels each day. Their love for their children is so powerful that it has driven them to leave the homes and countries they love and actually walk hundreds of miles to what they imagine will be safer conditions for their little ones? (How desperate do you have to be to do that?!) It's like the mythic journeys celebrated in some of the greatest stories human beings have ever produced.

And yet, whose heart wouldn't be broken to realize that helping these heroines and heroes fill out reams and reams of invasive forms and questionnaires will in most case lead nowhere but back to their original unbearable circumstances? That's because the heartless Trump administration is doing everything in its power to thwart the dreams of these mythic champions.

To be more specific, here's what I've been told over the past two weeks while taking testimony from refugees seeking asylum in the U.S. (What follows is virtually in the refugees own words.) See if you find them as distressing as I have:

To repeat: those are the stories all us volunteers for AOL hear each day. I bring them up today because they turn out to be intimately connected with the liturgical readings for this third Sunday in Ordinary Time. Those selections offer encouragement to our mythic heroes, because their stories are quite like those of 6th century (BCE) Jews reflected in today's first reading as well as of Jesus himself in today's gospel selection. In fact, heroes' journeys, exile, and refugeeism turn out to be prominent recurring biblical themes. Think about it.

Consider for example today's first selection from the prophet Isaiah. It celebrates Israel's homecoming after a 50-year exile in Babylon (modern Iraq). It was then that their leaders had been forced to emigrate from Israel to Babylon. In other words, they were victims of wholesale kidnapping when Babylon's rulers desired to prevent uprisings in the land they had just conquered and occupied. So, like our clients here in Tijuana, the removed ones became victims of heartless force and violence back home.

And then in the Gospel (500 years later), we find John the Baptist and Jesus similarly victimized by regimes almost as ruthless as the Trump administration. Today's gospel reading focuses on Jesus the Nazarene becoming a political refugee for the second time. [Remember that first time in Matthew's "infancy narratives," when he and his parents sought expatriate status in Egypt to escape wholesale state infanticide under King Herod (MT 2:13-23)].

This time, that same king has arrested Jesus' mentor, the outspoken John the Baptizer. (The king would shortly have him beheaded.) And that in turn forces Jesus, as John's protege, to go underground. So, the young teacher flees for refuge specifically among non-Jews in the Gentile region of Zebulon and Naphtali in eastern Galilee.

Significantly, that entire territory constituted a rebellious district and a hotbed of revolution. As such, it was largely out of Herod's control. (To some extent, the king had only himself to blame for that, because it was in Zebulon and Naphtali that he had forcefully resettled migrants, non-Jews, and the poor.) In any case, Jesus finds comparative safety in that mixed context of foreigners, rebels and refugees.

Nevertheless, Matthew's gospel makes it clear that Jesus' semi-clandestine status didn't silence him. Instead, he simply took up where John had left off proclaiming their shared conviction that another non-imperialized world is possible. As a world without Caesars -- as a world with room for everyone Jesus called it the "Kingdom of God." It's what refugees and immigrants have always wanted.

What I'm trying to say is that here in Tijuana, AOL deals every day with refugees from violence pretty much like what's portrayed in today's biblical selections. Circumstances have forced most of them into exile every bit as effectively as 6th century (BCE) Jews were forced into Babylon. They are just as frightened as Jesus must have been when he fled to eastern Galilee to hide out in a district virtually ungovernable by reigning political authority.

Calling attention to the similarities between the stories of heroes at our southern border and those of Israel in general and of Jesus in particular should offer encouragement to both today's refugees and those who work with them (like the AOL permanent volunteers I've found so inspiring). The message for everyone is "this too will pass." In any case, here are my "translations" of the readings in question. You can find them here in their original form.