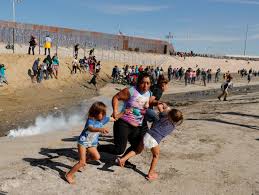 Today in the middle of my 80th year, I'm off to Tijuana to work for a couple of weeks with refugees and immigrants at the border. I mention my age not because I feel old, but because 80 used to seem ancient to me. Yes, I've done lots of these fact-finding trips before beginning with our family's six months in Brazil during the military dictatorship there back in 1984. Then there were all those trips to revolutionary Nicaragua beginning the next year, and many visits to Cuba. This time 'round, I find myself wondering if my age will be a factor in the eyes of my co-workers.

In any case, this is the first in a series of daily reports I plan to make on this website. I want to take readers with me on this particular expedition of first-hand observation and discovery.

So, I'm now seated on Delta Flight 2685, in seat 23B on my way from New York's JFK Airport to San Diego CA. It's a 5 hour and 45-minute flight. I'll stay overnight in San Diego's Gaslight District. Then, tomorrow I'll cross over into Tijuana, and begin work on Monday at 9:00 a.m.

My plan is to join forces with Al Otro Lado (AOL), a Tijuana-based social justice and legal services organization whose task is to help asylum-seekers in their quest to find refuge in the United States. I'm not sure what my function with the group will be. I might end up sweeping, washing floors, making beds, working in the kitchen, and serving meals. That would be fine. But I'm hoping my Spanish fluency will be of use. (For the past six weeks or so, I've been burnishing my skills in hour-long Skype sessions with a wonderful Spanish teacher in Cuernavaca.)

My main task however is to learn. I want to build on what I've gathered throughout my professional life as a theologian, researcher, teacher and habitual traveler to Global South stress points.

More specifically, my past observations (during those long stays in Mexico, Nicaragua, Guatemala, Costa Rica, Honduras, Brazil and Cuba) as well as my study with Global South thought leaders (especially in Costa Rica's Departamento Ecumenico de Investigaciones and during my years teaching in an on-site Latin American Studies Program) have already taught me that today's refugees are seeking escape from:

Virtually none of those causes are explained to the American people. Instead, the multifaceted central role of the U.S. government and CIA in creating the crisis is completely overlooked as politicians and the mainstream media (MSM) ahistorically "explain" the problem in terms of freeloaders, drug dealers, rapists, gangbangers and general criminality.

Ignored as well is the undeniable moral obligation of the United States to make reparations by rebuilding the economies and infrastructures they've destroyed and by giving generous and easy asylum (not to mention jobs and cash payments) to the refugees manufactured in the process. WE ABSOLUTELY OWE THESE PEOPLE SHELTER, PROTECTION, AND RESTITUTION! THIS IS NOT A QUESTION OF CHARITY. WE ARE MORALLY OBLIGED!

As you can see, my project here is to help balance our MSM-cultivated ignorance by acquainting readers with actual refugees and immigrants and their full stories.

Please tune in tomorrow for an update.

Related Topic(s): Asylum; Immigrants; Immigration And Customs Enforcement - Ice; Immigration Customs And Enforcement; Immigration Legal; Refugees; Reparation, Add Tags
Add to My Group(s)
Go To Commenting
The views expressed herein are the sole responsibility of the author and do not necessarily reflect those of this website or its editors.