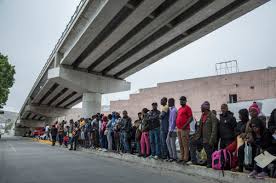 So, I'm here in Tijuana, Mexico. As I noted last week, I'll be in Baja California for three weeks working with a border rights project called Al Otro Lado (AOL). It's helping refugees and immigrants claim their internationally recognized entitlement to asylum from repressive governments, gangs, the ravages of climate change, and from a worldwide economic system whose "free trade" agreements have destroyed jobs and created grinding poverty across the globe.

Yes, I've entered another world here vastly different from what I experience every day in my new home in super-affluent Westport CT. And I love it. It's brought me to a social location similar to the ones experienced by most of the world's inhabitants including Jesus and his friends 2000 years ago.

What I've found at this Mexican border is closer to the reality of my former home in central Kentucky's Appalachia where so many live from hand to mouth as part of the national precariat that ironically (as Rev. William Barber says) has come to include 43% of Americans in the world's richest country.

Here in Tijuana, I've met two kinds of people that give me great hope despite the power of a third group that dominates public policy and discourse. All three groups stand starkly revealed in the light of today's liturgical readings. As we'll see presently, those selections from the Jewish and Christian Testaments call Jesus' followers to a universal community that overcomes the narrow ethnocentrism required to justify torturing one's fellow human beings.

Consider that last group first -- the dominant one. They're best represented by Donald Trump and the Republican Party whose mostly white members (sporting their red MAGA hats) loudly trumpet their Christian faith. Nevertheless, this group takes great delight, it seems, in making their brown and black fellow Christians suffer.

It's a kind of sadistic cruelty that puts obstacle after illegal obstacle in front of mostly non-white Christians seeking a healthier, safer life for their children and themselves. Despite court orders to the contrary, the process continues to separate small children (and even infants and babies) from their parents. It confines asylum seekers in what refugees themselves call "the icebox" (hielera) -- a holding tank through which those lucky enough to get a "Credible Fear Interview" (CFI) must legally endure for no more than 72 hours but where stays sometimes stretch out for 3 or 4 weeks.

The tank is kept at 48 degrees Fahrenheit while detainees are allowed to wear no more than one layer of clothing, are given aluminum blankets to cover themselves at night and are served frozen and expired food. It's a form of state-sponsored torture. There's no other word for it.

Meanwhile, those who have not yet qualified for a CFI are forced to wait 3 or 4 months for the privilege to endure such cruelty. Each of them is given a number placing them on "The List" for eventual refrigerator admission. So, thousands have their ciphers scratched on little pieces of paper that they're warned not to lose.

The announced time for reading list names is usually 7:30 in the morning. But occasionally, the names are called at 4:00 a.m.; other days, the time 10:00. And those missing the summons, must reapply for another number and begin their wait all over again. Most days only 40 people are called to the hielera over a scratchy bullhorn with names read quickly in distorted, barely audible tones. But some days, as many as 700 names are called. Other days, no one is summoned.

Under such a "system," you can imagine how people are kept off-balance. It inflicts confusion, anxiety, frustration, disappointment and pain on impoverished people who have already experienced great hardship typically walking with their small children and their most treasured possessions all the way from places like Honduras and El Salvador. Just imagine missing the announcement of your number!

But that's the entire point: to make asylum seekers fail -- to render the process as difficult, excruciating, frustrating and futile as possible. That's white Republican Christianity for you.

Meanwhile, the Christians at the gate awaiting hielera admission provide examples of courage, optimism, kindness and hope. That's the second group I've seen here over the past week -- a hopeful one in the face of their fellow Christians' meanness. In fact, all AOL volunteers have witnessed those edifying qualities every day despite the long lines, despite the frustration and dashed hopes. Those waiting in line are typically earnest, patient, smiling, and easy to speak with.

The children are the best running around, playing, drawing pictures with the crayons supplied by border workers anxious to help. This second group is awe-inspiring and uplifting.

But it's the third group that is for me the most admirable. Here, I'm referring to the volunteers in Al Otro Lado. In the past year, over 3000 of them have passed through the program. Most come from the U.S. The majority of them are young women. Many are law students or lawyers. 3000 in a single year!! Does that give you hope or what?

Volunteers prepare asylum seekers for their CFIs and provide free legal counsel otherwise unavailable to their confused clients. Typically, the counsellors stay for a week. Many stay longer. Some come back every few months. None of the thousands of volunteers much less the permanent staff is motivated by money or material ambition. It's all about service, respect for clients, contesting the insanity of the entire process and about giving, giving, giving . . .

Related Topic(s): Asylum; Christian Right; Christian Terrorism; Christian Values; Christianity; Cruelty; Faith; Jesus; Refugees; Sunday; (more...) Volunteers, Add Tags  (less...)
Add to My Group(s)
Go To Commenting
The views expressed herein are the sole responsibility of the author and do not necessarily reflect those of this website or its editors.