If he had been elected, there is no telling how transformational this new approach might have been. 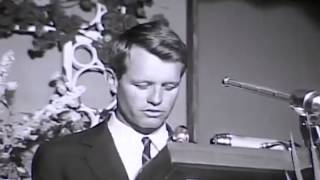 Robert F. Kennedy died on June 6, 1968, at a critical turning point in a presidential campaign that had the potential to bend the arc of American history. Kennedy had just won the California primary and was preparing a summer crusade to wrest the Democratic nomination from Vice President Hubert Humphrey -- and with it the prospect for defining the party as a force for economic and social justice and peace.

Kennedy may not have begun as a perfect messenger, but after the assassination of his brother less than five years earlier, RFK started a journey that saw him moving beyond the cautious Cold War liberalism of Humphrey and Presidents Kennedy and Johnson. There were many measures of that progression. But the one that shouts across the 50 years since his death is found in the speech the senator from New York delivered to a crowd of 20,000 at the University of Kansas, on March 18, 1968.

Speaking two days after he had announced his entry into the presidential race, Kennedy signaled that his would be a radically different campaign. It would, he suggested, seek to alter the national narrative at a deeply unsettled moment. The goal would be to open up a discussion of what might be possible in a more united and forward-looking nation.

"I don't want to run for the presidency -- I don't want America to make the critical choice of direction and leadership this year -- without confronting that truth. I don't want to win the support of voters by hiding the American condition in false hopes or illusions," Kennedy told the crowd of college students and anti--Vietnam War activists. "I want us to find out the promise of the future, what we can accomplish here in the United States, what this country does stand for and what is expected of us in the years ahead. And I also want us to know and examine where we've gone wrong. And I want all of us, young and old, to have a chance to build a better country and change the direction of the United States of America."

Related Topic(s): American History; Bobby Kennedy; Compassion; Kennedy Assassination; Presidency; Speaking, Add Tags
Add to My Group(s)
Go To Commenting
The views expressed herein are the sole responsibility of the author and do not necessarily reflect those of this website or its editors.