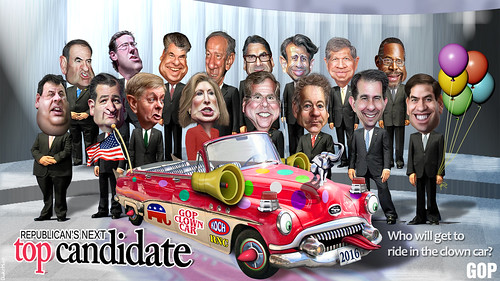 It's really difficult to imagine a president more deserving of impeachment and conviction--and, bizarrely, a president that seems to be advocating for it more enthusiastically--than Donald Trump.

It seems likely that the House of Representatives will impeach Trump, and it also seems unlikely that the Senate will vote to convict. Seeing Lindsay Graham and other Banana Republican lickspittles circle the wagons and double down on their war on reality while ratcheting-up their treachery, the likelihood of a conviction is even more remote than before. But, if that highly unlikely event did occur, Republicans would have to find a reasonable facsimile of Trump to run in 2020.

As was obvious in 2016, the Republican base, or more accurately the Cult of Trump, is not going to be mollified by an establishment candidate like Mike Pence. So the Republican Party would have to come up with a reliable stand-in for their standard-bearer.

The Trump substitute would be compelled to utilize the secret sauce of Cult contentment--a toxic stew of hate, fear, grievance and paranoia delivered with the bravado and clueless idiocy that is a Trump hallmark.

The actual content of any single Trump "event" speech is irrelevant--a speech from 2016 can be delivered in 2019 and can be completely effective.

Should a Trump substitute be needed, I purpose placing a five-gallon pail of horse manure with a red baseball cap sitting on a pile of straw covering the top and a pair of spurs attached at the base. The pail would be called "Trump" and would sit on a slowly revolving turntable placed on podiums at campaign events around the nation. A looped recording of Trump's greatest hits--"lock her up", "build the wall", "send them back", etc, etc, would be played at maximum volume for however long it takes for the Cult to get its fill. The whole event could be branded Trumpapalooza.

"Trump" would be placed on ballots around the nation along with--of course, the only person capable of filling the VP role (being both a true cipher and an unctuous toady) for both Trump and "Trump"--Mike Pence.

Retired mechanical designer. Advocate for effective government.
Related Topic(s): Replacement, Add Tags
Add to My Group(s)
Go To Commenting
The views expressed herein are the sole responsibility of the author and do not necessarily reflect those of this website or its editors.