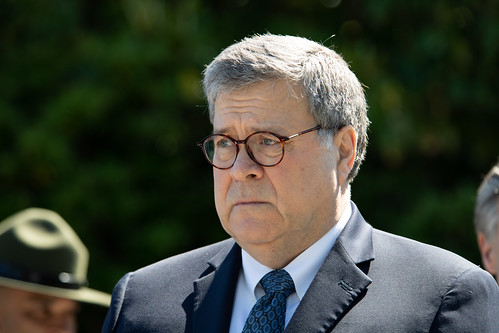 I previously opined that Attorney General William Barr had shown his true nature - that of a lickspittle and a fraud, and that he has violated his oath of office and betrayed the nation. In the year since being sworn-in, Barr has reinforced that assessment at regular intervals - dutifully investigating Trump's perceived political enemies (Comey, McCabe, Brennan, etc.) and providing cover for Trump's criminal behavior. (side note: Comey arguably affected the 2016 election in Trump's favor more than Russians, social media and voter suppression combined.)

Barr's latest outrage was meddling in Roger Stone's sentencing. It has brought attention to his malfeasance - eliciting Barr's cynical protestation that Trump's tweets concerning the Justice Department's unethical meddling make it impossible for Barr to do his unethical meddling on the down-low.

Trump, in essence, has stepped into the center of the Rose Bowl and began jumping up and down and waving his arms while screaming that his "personal Roy Cohn", Bill Barr, is doing his illegal bidding at the Justice Department.

So, is Barr really upset that Trump is drawing attention to his dereliction? I doubt it. It's much more likely that Barr has been shamed by the integrity and professionalism exhibited by all four DOJ attorneys who resigned from the Stone case in protest.

It's important to recognize that integrity and professionalism are Kryptonite for Barr. He is completely unfamiliar with both, and the thought that those under his supervision exhibit them must be quite frightening to him.

Retired mechanical designer. Advocate for effective government.
Related Topic(s): Fraud; Trump, Add Tags
Add to My Group(s)
Go To Commenting
The views expressed herein are the sole responsibility of the author and do not necessarily reflect those of this website or its editors.