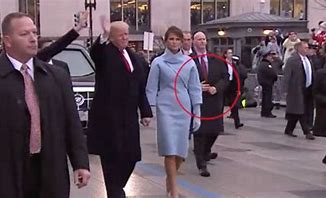 Here's an issue tangential to the election about which I have heard nobody talk: the cost of Secret Service details legally required (and the Trumps may thank President Obama for the largesse) for the rest of the lives of Donald and Melania. And Barron, who will be by law overseen by Secret Service until he is 16.

Why did Obama in effect guarantee the lifetime physical security of a man who turned around and destroyed everything he could find that had Obama's hands on it?

Simple: Barack Obama had two school-age children and a wife who loves him dearly when he ran for President and was elected, and then definitively re-elected. The Obamas were the most successful family unit to occupy the White House during at least the last two centuries.

In short, Barack Obama was and is a basically good and decent man, and prudent about his family, and by extension, about the whole American family. Thus, promulgating the current policy on protection was prudent, setting aside discussion of expenses.

Personally, I have always felt that somewhere very early in his first Administration, Obama was sat down by unnamed individuals and congratulated for having triumphed, but then told that although it would not happen often, he would occasionally be told what to do.

And if he didn't comply: "We know where your family is 24 hours a day. We know you'll pull it off brilliantly, Mr. President."

Now, the Republicans, who in 1994 reduced the protection to 10 years in the first place, definitely question whether it is worth the cost. Is lifetime protection of former presidents and their closest kin a good bargain within the realm of 2020 economics?

I don't know. Who are the currently eligible protectees? Lessee, Bill and Hillary (2), GWB and Laura (2), Jimmy Carter (1), Barack and Michelle (2), and the Trumps, Donald, Melania and Barron (3).

As the article states, the Secret Service does not divulge the costs of its protective details, but it's believed to be in the range of tens of millions of dollars a year for each former president. So there are five of those surviving, plus mandated protection for 4 First Ladies and one First Child under 16.

The specific security requirements for the 10 named will vary by degree of necessity and cost, so it is difficult to project any long-term figures. But we may be sure that protection of POTUSes, FLOTUSes and their young children will continue to cost the American taxpayers some tens of millions of dollars per year.

It's up to y'all if you think they're worth it!

In 2013 President Obama and Congress made sure that Secret Service protection lasted a lifetime, instead of the 10 years to which such protection had been reduced.

Under current law, the elder Trump sons and daughter are not covered by Secret Service protection since they are past 16. That also disqualifies Chelsea Clinton, who has turned 40, and who I assure myself is utterly glad about it.

Related Topic(s): Family; Former President Security; Obama; Secret Service; Secret Service Protecting Presidential Children An; Trump, Add Tags
Add to My Group(s)
Go To Commenting
The views expressed herein are the sole responsibility of the author and do not necessarily reflect those of this website or its editors.