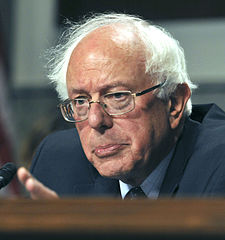 When Sen. Bernie Sanders initially began running for president, his hope was to "trigger the conversation" about the way the economic and political system is rigged by the billionaires and their corporations. He wanted to begin a movement around a vision of how the country could be run for We the People instead of a few billionaires and their giant corporations, and give that movement momentum.

That was the idea; start a movement out of a campaign that could get a "for-the-people" message out. All the people he brought in would take it from there.

The arguments that would prompt Sanders to contemplate not running were clear and compelling. Sanders wasn't going to be getting the huge-dollar donations that keep so many other candidates going. He might not be able to get the resources to travel to and have rallies in enough of the primary states to be heard at all, and might not meet the threshold for getting into the presidential primary debates. The risk was that he might get whipped so badly that people would for decades run from the idea of running for office on Sanders' progressive themes.

Nonetheless, Sanders decided to run and spoke his message. Then BANG, look what started happening. On the first day after announcing his campaign he raised $1.5 million in small-donor campaign donations. In just two months he raised $15 million.

BANG! What Sanders didn't know was that he was bringing a match to a gasoline convention. With huge rallies and huge enthusiasm, in just a short time he is leading (as of Friday) in two out of three recent polls in New Hampshire, the only state other than Vermont where he has real name recognition.

Suddenly the game has shifted. People realized that Sanders is more than a fringe candidate. He could plausibly win the nomination.

But as we talk about Sanders "winning," here is the thing: He HAS won.

Nobody expected to be actually talking about him being the nominee and all that. But whether he is or not, the discussion Sanders wanted HAS been triggered, and an amazing list of supporters now exists. Now there is the hope that he and we can build a movement out of it that lasts past this election.

Regardless of the Democratic nominee, we will all need to work on making sure an anti-immigrant, anti-Social Security, pro-billionaire, pro-hate candidate doesn't get elected president and destroy the country. Look back at the 'W' Bush legacy of a country almost destroyed. Financial collapse, war, how many lives gone? This new "Trump" GOP is now much, much worse than the Bush era -- regardless of which billionaire-backed (or billionaire) candidate they nominate.

Meanwhile, a progressive populist uprising is also happening in the United Kingdom, with Jeremy Corbyn running to lead the Labour Party. The Labour party had drifted so far to the right that they apologized for spending money on public needs and are supporting austerity measures. Corbyn says that the UK needs to go back to being the real Labour party, and has called for renationalizing the railroads, energy companies and other privatized services so the people benefit instead of the already-wealthy few. Then -- BANG! -- he went to the top of the polls. So many people (lots of them young) started signing up to join the Labour Party that the Tony Blair wing of the party is trying to stop new people from being allowed to join! What's being called "feeling the Bern," and the establishment reaction, is not just a U.S. phenomenon.

On one level, at least, Bernie Sanders has already won. Fixing our country's problems is not just about electing a president. Billionaire money has taken over many statehouses -- where they gerrymander the districts to keep themselves in power. Sanders likes to say that there are two primary sources of power, "organized people and organized money," and that when people across lines of race, gender, class, nationality, and sexual orientation reject right-wing wedge politics and come together, "there is nothing, nothing, nothing that we cannot accomplish."

Irrespective of the results of the primaries, We the People need to take it from here.

Related Topic(s): Billionaires; Financial; Politics; Power; Sanders-Bernard, Add Tags
Add to My Group(s)
Go To Commenting
The views expressed herein are the sole responsibility of the author and do not necessarily reflect those of this website or its editors.