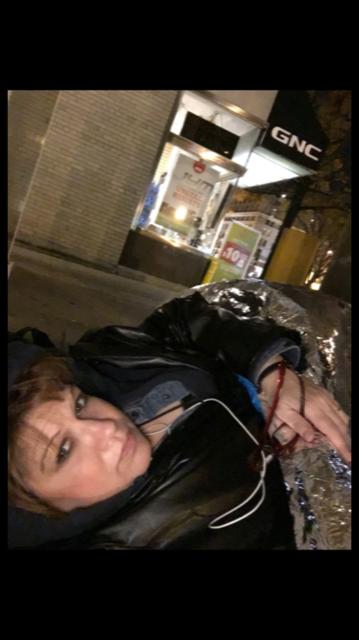 In today's era of advanced technology current information thru world news and Wikipedia is merely seconds away to any social class thru the simple instant access of the internet. A fast paced society not only revolves around but demands up to date knowledge on popular political, social and news worthy information.

So WHY would a highly educated well-traveled male/female individual fail to be aware of the true harsh unbiasedness of the rising numbers of unfortunate individuals experiencing "Homelessness" or the concerns surrounding "Homelessness Issues"? Perhaps those individuals are merely clueless to world topics which do not personally affect them or they simply are exhibiting a high level of narcissism or possibly even basically desensitized to world issues or perhaps their little world has not been effected therefore, they assume homelessness MUST be the individuals fault as they themselves would never allow the same dire circumstance to occur to themselves.

To be clear Homelessness is not always a circumstance one can prevent from occurring let alone control once the domino effect has begun its course. Society has attempted to label reasons for homelessness embedding a generalized vision encompassing stereotypical avenues to homelessness such as substance abuse, mental illness and criminal background all directly relating to homelessness being the unfortunate individual experiencing homelessness's personal inability to maintain main stream flow within society. While a percentage of the homeless population does in fact experience these issues it is not to say the majority of homelessness occurs as a direct result of those same issues. I myself know many individuals who have experienced one of or all of the three cited generalizations and those individuals maintain a home effectively therefore, how can you explain that some maintain homes and some do not.

At a recent invitation only event encompassing professionals from various realms of the business, political and government arenas I was approached by a highly educated and well-traveled male who very pompously announced his opinion, which was entirely void validity however, very confidently stating "90% of the homeless are mental" as factual. Of course I immediately interjected to correct this uneducated individual by providing him with national statics as to the REAL causes for homelessness to which he simply ignored my factual evidence and restated his initial opinion in a louder condescending tone perhaps assuming that by raising his voice I would be silenced yet still I persevered and continued to explain the various reasons for homelessness have absolutely nothing to do with mental illness, substance abuse or criminal activity but are simply lack of sufficient economics. When he saw that I was not a weak female willing to agree his opinion was factual and I corrected his ignorance he very suddenly and quietly left the conservation.

WHY would anyone let alone an educated professional NOT be acquainted to the national crisis in homelessness and know the reasons behind it? With this question weighing heavy on my mind I decided I must give the individual the benefit of the doubt and perhaps he was just not schooled on the true reasons for homelessness and had come to his own conclusions. To which I decided it is MY responsibility to educate this individual and all other individuals so that we can have positive growth.

To the individual experiencing homelessness the government and society treat those individuals as outcaste, ostracized as if they had committed a heinous crime, yet we as a society provide criminals with more rights and more accommodations than we do the victims of homelessness. Criminals receive three meals a day a cot each night and access to sanitation on a daily basis as needed all of which the homeless do NOT have access to and are degraded, demeaned and threatened with incarceration by society and the government when they attempt to exercise their constitutional rights as a human being. Continually blaming the homeless for their unfortunate predicament rather than assisting the homeless back into society with as little barriers as possible is unacceptable. Homelessness is a journey not a life sentence. To provide homeless individuals with the resources they need without compromising their dignity or forcing them to fit into one of three generalized identifying boxes is a simple task IF you are not attempting to extract monetary or egotistic gain from the process.

Homelessness is the most unbiased circumstance any individual can experience. "HOMELESSNESS" is fierce and demanding and does not ask IF it is convenient or wanted or what your gender, age, political affiliation, sexual orientation or religious stance is Homelessness just comes like a thief in the night and takes until there is no more to take leaving the strong to survive and the weak to fall by the way side. Homelessness will leave a individual without any material representation of their life's work however, it does NOT take our skill set, education, life experiences, principals or integrity. We are the same people we were with the same value. We Are Human, We Have Value.

As a chronically homeless female myself at no fault of my own I would hope that you as members of society will seek to self-educate yourself on the REAL reasons of homelessness and what homelessness issues are so that you can understand the global unbiased impact homelessness has and perhaps as a result of this awakening offer your personal assistance to a solution or at the very least the next time you run across a homeless individual treat them with the upmost respect they deserve as they have earned it walking thru a Hell you can only hope to never experience yourself.

Kelly Miller is a current volunteer at the National Law Center on Homelessness and Poverty where she works in development and communications. Kelly is active advocate for Social Justice and Basic Human Rights. As a result of Kelly's public (more...)

Related Topic(s): Experience; Government; History; Homelessness; Homelessness; Humanities; People; People; Responsibility; Rights; (more...) Violence, Add Tags  (less...)
Add to My Group(s)
Go To Commenting
The views expressed herein are the sole responsibility of the author and do not necessarily reflect those of this website or its editors.