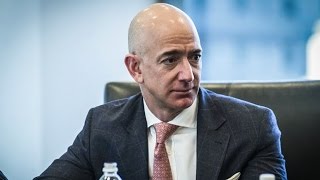 Jeff Bezos is Using The Washington Post to Protect the CIA
(Image by YouTube, Channel: The Ring of Fire)   Details   DMCA
>

There are now hundreds of supposed "facts" which prove Russia influenced the 2016 US election. I thought I'd go back to a few basics...

"The CIA says" is never a great way to start a sentence. But that's one basis of the charge that Russia "hacked" the US presidential election.

Members of Congress were secretly briefed by the CIA on "the Russian affair," and media, led by the Washington Post, ran with the story that Russia influenced the US election on the side of Trump.

Major media outlets are happy to cite the CIA as an authority -- conveniently ignoring the fact that people in the intelligence field are taught to lie. It's their stock in trade.

You might remember the Washington Post's role in defaming and destroying Gary Webb, who, in 1996, published a series of articles in the Mercury News about the CIA seeding black Los Angeles neighborhoods with crack cocaine. The Post basically asked the CIA whether the charge was true, and when the Agency denied it, the Post attacked Webb as a "fake news" reporter. The same Washington Post led the campaign to tie the Russian government to Hillary Clinton's defeat. And the Post, once again, used unproven statements from the CIA to back up their claim.

I could go on and on about the Post and its historic CIA ties. But now, right now, the owner of the Post is Jeff Bezos, who also owns Amazon. And Amazon has a $600 million contract to provide the CIA cloud computing services.

Ordinarily, that would be called a fatal conflict of interest, whenever the Post opens up its yap about the CIA in any context.

However, mainstream news outlets, the very big ones, don't go around criticizing each other's ownerships; so the Bezos-CIA relationship is conveniently ignored.

An honest lead paragraph on Russia-CIA-Trump allegations in the Post, however, would start this way:

"Our paper is owned by Jeff Bezos, and Jeff is making $600 million to provide the CIA with computing services, so take everything below with a grain of salt the size of Langley."

Going one step further, Amazon and the CIA are both in the data-collecting business. What are the chances that Amazon, in the interest of "national security," has been sharing its massive customer data with the CIA and other US intelligence agencies?

This should lead to another conflict-of-interest statement from the Washington Post: "As you read any article in our paper, keep in mind that our owner may be data-mining you and passing the information to the CIA. Have a nice day."

Am I being too hard on Amazon? Do they have the basic guts to stand up to the intelligence community and resist its demands? Here is what author Norman Solomon had to say about that in 2014 (Huffington Post):

Related Topic(s): Amazon; CIA; Jeff Bezos; Washington Post; Wikileaks, Add Tags
Add to My Group(s)
Go To Commenting
The views expressed herein are the sole responsibility of the author and do not necessarily reflect those of this website or its editors.