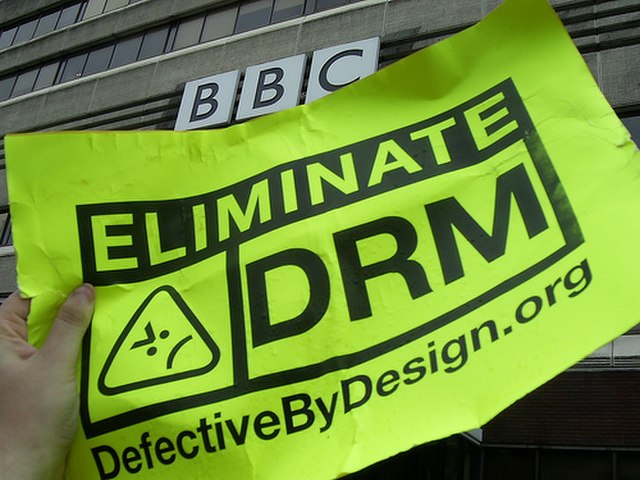 W3C is the Web's "international standards organization." Simply put, its recommendations are the reason you can load almost any web page in almost any browser and expect to see the same things on your screen. When W3C recommends something, it's a lead pipe cinch that all the major browser creators will incorporate that recommendation in their products ASAP.

In this case, W3C's recommendation is the equivalent of a printing standards body deciding that henceforth printing presses should only emboss cuneiform characters in clay tablets. That is, it calls for universal adoption of an obsolete -- to the point of silliness -- way of doing things.

The purpose of Digital Rights Management is to allow creators to control the use of, and prevent the copying of, "intellectual property" -- in the form of copyrighted informational works or proprietary hardware creations -- after its original sale.

The 30-odd year history of DRM is one of consumer dissatisfaction and sequential failure. Every DRM scheme is broken sooner or later (usually sooner), after playing hob with purchasers' ability to actually make use of the products they've bought. Lately, in addition to trying to improve DRM, Big Content and Big Manufacturing have begun asking politicians to criminalize cracking of DRM. That's not going to work either. The only winners in the DRM saga will be the companies which drop the whole idea and come up with revenue models that don't require them to screw their customers in the name of preventing copying and modification. The false hope of EME puts off that day.

Until the Encrypted Media Extensions scheme is broken in some fundamental way (a way that can't be fixed with browser updates to the EME code itself), Internet users are going to increasingly find themselves frustrated in copying material they own between their devices, making archival copies, or grabbing snippets under the "fair use" provisions of copyright law.

EME has also already produced a gigantic breach in trust within W3C itself. As Cory Doctorow of the Electronic Frontier Foundation points out (in an open letter announcing EFF's resignation from the body), "W3C is a body that ostensibly operates on consensus," yet EME was imposed on behalf of Big Content and over many objections by the body's director, Tim Berners-Lee, and adopted by a vote of less than 60%. Berners-Lee and the proponents of DRM may well have permanently wrecked W3C's reputation as a trustworthy creator and evaluator of standards for the Web.

Related Topic(s): Copyright; Digital Rights Management; Internet; W3c, Add Tags
Add to My Group(s)
Go To Commenting
The views expressed herein are the sole responsibility of the author and do not necessarily reflect those of this website or its editors.