Geography has been a double-edged sword for Russia. On the one hand, geography has blessed it with much beauty and prodigious natural resources. But geography has also made Russia vulnerable due to a lack of oceans and mountain ranges to fend off invaders. This combination has made Russia an irresistible temptation to megalomaniac leaders, like Napoleon and Hitler, who thought they could conquer this vast land that straddles two continents. 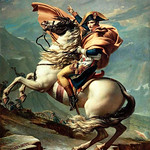 And what did Napoleon and Hitler get for their hubris? Russians galloping into Paris and rolling tanks into Berlin, to paraphrase Dmitry Orlov.

But don't let that dark humor fool you about Russians' general attitude toward war. They hate war and have a visceral fear of it. (Although, if backed against the wall, they will fight to the death for their home. Picking a fight with these people is not recommended). That is because they have not forgotten the terrible price they have paid. The Soviets lost about 27 million people fighting off the Nazis - 17 million of them civilians - and one third of their country was destroyed in the process. General Eisenhower wrote in his memoirs of what he saw when he went into the Soviet Union in 1945:

When we flew into Russia, in 1945, I did not see a house standing between the western borders of the country and the area around Moscow. Through this overrun region, Marshal Zhukov told me, so many numbers of women, children and old men had been killed that the Russian Government would never be able to estimate the total.

Although many Americans and Europeans have now bought into the America-centric rhetoric of the U.S. winning WWII in Europe, it was not controversial in the aftermath of WWII to acknowledge that the Soviet Union had, in fact, broken the Nazi Wehrmacht, likely saving many American lives by bearing the brunt of the fighting as one of FDR's advisers had talked him into going into North Africa in late 1942, which significantly delayed the U.S. opening up a western front attack on Germany.

It's a shame that the Cold War and Washington's post-Cold War triumphalism have undermined our ability to acknowledge the sacrifices and achievements of the Soviet Union when we were allied against the Nazis.

But with or without the west's approval, Russia solemnly commemorates Victory Day each year with elaborate parades in major cities, like Moscow and St. Petersburg. The Russian president gives a speech before the Moscow parade and the parade is followed by the Immortal Regiment Rally in which Russians march through the streets carrying photos of family members who fought and/or died in the Great Patriotic War (WWII).

The nights leading up to Victory Day this year included light shows on a trio of large high-rise buildings near where we've been staying. Alternating images of the St. George Ribbon (more below), the Red Star, and the years 1941 and 1945 and other related iconography were projected onto the buildings.

Part of the parade route included New Arbat which is the street our apartment is located on, so I headed outside about a half hour or so before the start time and braved the cold. I was able to find a good vantage point to watch and take pictures, having decided that I wouldn't walk all the way over to Red Square, reasoning that it would be too crowded and I likely wouldn't be able to get in for a good view. I later learned my intuition was correct and that only people who have permission can actually get into the square on Victory Day - probably officials, foreign dignitaries and special guests.

More people came out to line the streets as the time drew near. Lots of families, people with their phones out ready to snap pictures, and a smattering of individuals waving Russian flags thronged the edge of the modest barricades and tape that separated the spectators from the road. In terms of security, the atmosphere was fairly low-key. Police officers were stationed every 25-30 feet. At one point I spotted an officer on the roof of one of the buildings across the street surveying the scene. When I looked up again a while later he was gone.

Many officers wore wind breakers and some had on rain coats. I did not see any guns. There was no riot gear.

As people waited, earnest Russian music spilled out of loudspeakers. Then the music stopped and a brief announcement was made. A short motorcade of military officers in their crisp uniforms drove by about 5 minutes before the rest of the procession of tanks and other military vehicles began their ride down the street. Some soldiers in the procession waved to the cheering crowds as they rode by, sometimes honking their horns.

I saw several people sporting the St. George's ribbon, which is common on Victory Day as it's a symbol of patriotism and solidarity. The ribbon has its origins in the Czarist period as representing the highest military order. In recent years some nationalist groups have tried to co-opt the symbol or variations of it.

The official transcript of Putin's speech is available here. It was fairly short, acknowledging the great sacrifices that made the defeat of Nazi Germany possible, and emphasizing that Russia will never be conquered and that international cooperation is the key to preventing any future world war.

Related Topic(s): Lenin; Russia; Russia’s Victory Day; Vladimir Putin; World War Ii, Add Tags
Add to My Group(s)
Go To Commenting
The views expressed herein are the sole responsibility of the author and do not necessarily reflect those of this website or its editors.