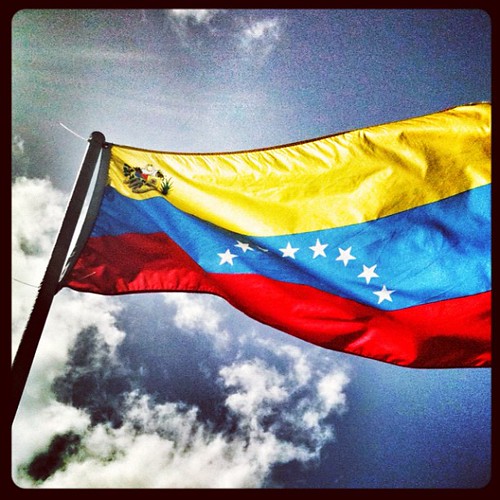 "How come we're not at war with Venezuela ? They have all that oil". Donald Trump

I was in Caracas Venezuela on April 30th, the day of the failed coup. There were eight of us, five from NYC, one Vermonter and one Canadian, along with the leader of our group, a Venezuelan with whom I had traveled to Venezuela once before, in 2012 when Hugo Chavez was still alive. Chavez was elected to power in 1999 leading what is known as the Bolivarian Revolution. Less than three years later, a 2002 U.S. backed coup failed to overthrow him.

I witnessed back then Chavez's wide base of support, and the reasons for it: a new constitution guaranteeing as human rights health, education, housing and social welfare, and the laws and projects designed to make those rights a reality. The results were impressive : one million new low cost housing units, a dramatic drop in the poverty rate, infant mortality rate down from 19.1 per thousand in 1999 to 10 per thousand by 2012. Health Care was made free for all Venezuelans, reflected by an increase in life expectancy. Working hours were reduced to 6 hours a day and 36 hours per week, without loss of pay while the minimum wage became the highest minimum wage in Latin America. In December 2005, UNESCO said that Venezuela had eradicated illiteracy. The malnutrition rate fell from 21% in 1998 to less than 3% in 2012.

The national management of the oil industry in 2003 put Venezuela in control over its most valuable natural resource, and used it to fund many of the social reform programs. Venezuela has the world's largest oil reserves which the U.S. has coveted ever since and admittedly seeks to control as John Bolton made clear on Fox News: "It will make a big difference to the United States economically if we could have American oil companies invest in and produce the oil capabilities in Venezuela".

So the Chavez's presidency marked a new day of empowerment for Venezuela's poor and working class people, overwhelmingly people of color. And there was always a sector of the population, mainly the very wealthy mainly white upper class who hated Chavez and his openly socialist policies.

So I went again this April because I wanted to see for myself if it was possible the impressions we are now given by the mainstream corporate media were true-- was Venezuela really on the verge of civil war ? Had the Venezuelan people turned against the Bolivarian revolution and President Maduro who was elected to office after Chavez's death in 2013 and re-elected in 2018 ? Did the U.S. supported opposition really have widespread mass support ?

Back in January, a politician virtually unknown to Venezuelans named Juan Guiado, long long mentored by U.S. regime change specialists, announced himself as the president of Venezuela after receiving a phone call from U.S. Vice President Pence. Guiado, who was the head of the National Assembly, an
unelected post, vowed that President Maduro would be gone by Mayday. While blackouts of electricity rolled across Venezuela, Trump and Secretary of State Pompeo threatened U.S. military intervention if Maduro didn't step down.

We were in Venezuela from April 26th to May 5th. On April 30th , the morning of the failed coup, we knew something was up as we ate breakfast in our hotel's restaurant which had on open air terrace. I saw a woman banging on a pan standing on a balcony in the apartment house next door to the hotel, yelling out to others to join her and denouncing Maduro. No one else joined her. She went back in. We heard what could have been firecrackers or gunfire. But when we looked out on to the street, business seemed no different than any of the previous three mornings we were there--people on their way to work, students to school, motor bikes and cars on the streets.

By the time we left in our van for a housing conference at the Hotel ALBA celebrating the construction of two and a half million new low cost housing units, we learned that there was a coup attempt, yet we had seen no sign of a military or police presence on the streets as one might expect if there was a major threat to the government. If you were in Caracas that day, outside of the upper class neighborhood where the attempt was made, you would never know there was a coup attempt. During a lunch break in the conference, we were able to watch TV coverage on the attempted coup from both CNN and Telesur, A Venezuelan news outlet. Right in the lobby of the hotel, our group quickly wrote a statement denouncing the Trump administration's efforts to overthrow the government and we were interviewed by Venezuelan government television, which was featured in the news throughout the day. Our statement said in part, "We are a group of US and Canadian citizens gathered to denounce the US government's illegal and immoral actions against the people of Venezuela.We also oppose the US sanctions which are not only illegal but are already causing immense suffering, especially through the denial of much needed medicines and adequate nutrition---"

While we soon learned that the coup had failed, it was not until later that we heard the incredibly farcical details of what transpired. Some might remember U.S Secretary of State Pompeo claiming the day before that Maduro was escaping to Cuba. In fact, Guaido had been led--actually duped-- into believing that high level military officials were going to defect and join him outside the airport that morning, along with large numbers of soldiers. But almost all the soldiers who showed up-- after being lied to that they were going to receive promotions-- quickly ran back to the base when it was clear they had been tricked into appearing to defect ! Within a short time, the same Venezuelan Defense Minister that Guaido had expected to defect to his side went on national television surrounded by his generals to say that the military was standing strong with Maduro and that no coup had taken place.

An estimated 2,000 Guaido supporters did gather on an overpass to watch the highway below where 200 or so violent protesters were firing on the military and throwing Molotov cocktails near the air base--as tens of thousands of Maduro supporters flocked to the presidential palace to defend it. Guiado then went into hiding but not before calling for the "mother of all marches" for the next day's Mayday celebrations. His "mother of all marches" pulled out at best 3-4,000 less than 1% of the estimated 400,000 our group marched with at the Maduro May Day rally, one of the largest pro-government mobilizations since the days of Chavez.

It was quite striking even for a long time activist like myself to witness the blatant lies and propaganda that saturate our media. It was like two different worlds, as CNN, the NY Times and mainstream media reported that a coup was underway in Venezuela. The New York Times reported, "A predawn takeover of a military base in the heart of the capital,"--- and that Guaidó had made a video appeal for an uprising from the "liberated" airbase -- except they never got on the base. In another outrageous example, there's a film clip that's been aired of two military vehicles running into opposition protesters. What's not shown is what happened next, as the vehicles were surrounded by soldiers, with the occupants forced at gunpoint to get out and lie down on the ground ! The truth is that the vehicles were driven by defecting soldiers who rammed into their own protesters to make it look like it was the government violently suppressing dissent. The drivers of the vehicle were arrested shortly after by the military as the rest of the news video clearly showed.

"This is not the foolish country of yesteryear. This country has awoken, and that's one of the biggest changes that has taken place here in these 13 years, a cultural change"-- Hugo Chavez, 2012

So this trip did dispel for me any of the widespread notions spread here 24/7 by the mainstream U.S. corporate media that Maduro and the Bolivarian revolution have lost popular support and that Venezuela is a country on the verge of a civil war. While the US sanctions, along with plummeting oil prices have created serious challenges to Maduro, popular support and enthusiasm for the Bolivarian revolution and the elected government remains.

Related Topic(s): Coup; Housing; Media; Oil; Oil; Opposition; Revolution; Sanctions; Venezuela; Venezuela Coup; (more...) Venezuela Oppositions Terrorism; Venezuelan Coup, Add Tags  (less...)
Add to My Group(s)
Go To Commenting
The views expressed herein are the sole responsibility of the author and do not necessarily reflect those of this website or its editors.