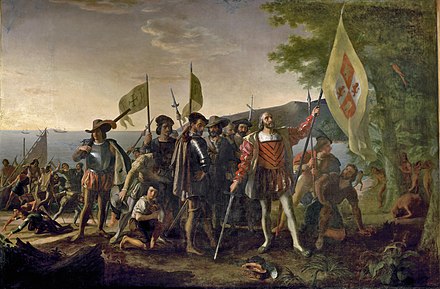 Landing of Columbus
(Image by (Not Known) Wikipedia (commons.wikimedia.org), Author: Author Not Given)   Details   Source   DMCA

"The following is derived from a chapter in a book I am writing, MythAmerica.

This is part 2 of a 4 part series on Oped News on the 'Columbus Discovered America' myth. Part one dealt with the nature of the world and people Columbus intruded on, debunking the Eurocentric myth that Columbus "discovered" a land that was barely populated, undeveloped, and an untamed wilderness despite millions of people already living there for thousands of years.

Part 2 here debunks the Columbus-as-hero myth by examining how his genocidal attacks on the indigenous populations of the Caribbean led to the opening of the African slave trade, which is covered in part 3 and how and why all this has been justified over the centuries. Part 4 focuses on the indigenous populations of what came to be the United States and attempts to assess how the European conquest of the Americas can be judged.

WHAT LIES HIDDEN BEHIND THE COLUMBUS MYTH
or
HOW COME WE NEVER HEAR ABOUT COLUMBUS'S 2ND VOYAGE ?

"The impressions which history books create are not just of academic interest. They have a powerful effect on the present situation. Every historian has a choice which he exercises, either deliberately or subconsciously, to select from the past so as either to make us satisfied with the record of our national behavior or to make us critical of it. Whether we are satisfied or critical affects our attitudes and our behavior today" ( Howard Zinn, Intro to Harvey Wasserman, History of the United States)

Columbus is still an important figure for many U.S. Americans, particularly of Italian descent, and Columbus day is seen by many as Italian-American Day, a day of pride to recognize the many achievements and contributions of Italian Americans to U.S. history. Columbus day became a national holiday only in 1937 reflecting the growing acceptance and assimilation of Italian-Americans into U.S. society, particularly after experiencing decades of discrimination and prejudice as southern European immigrants. Italians were among those targeted as anti-immigrant sentiment grew, culminating with the 1891 lynching in New Orleans of 11 Italian immigrants. And then there was the infamous Sacco and Vanzetti case, two Italian immigrants widely believed to have been framed for murder and executed in 1927. It is in this atmosphere that Columbus was held up as a historical hero who could give credibility to Italians in American history, as well as counter the sometimes deadly violence of WASP America on their communities.

So attacks on Columbus and demands to abolish it stir up strong emotions among many, although less so for calls for a day to honor the indigenous. But it's certainly no reflection on an Italy which did not exist at the time and therefore played no role in what we're about to uncover. In addition there are many Italians worthy of celebrating for their contributions to U.S. society, in the sciences, politics, music, art and film, sports. So here's the hard part for some where we examine the role Columbus himself actually played on his four voyages to the Americas-and what he paved the way for.

It's important to understand the very uncomfortable truths about what Columbus actually did come mainly from the historical actors themselves. These are primary sources, not secondary accounts nor hear say. We have Columbus's his own words in his journals and diary, as well as his son, his brother Bartholomew, the priest Bartolome de las Casas and Dominican friars Antonio de Montesinos and Pedro de Córdoba, the official historian of the Indies Fernandez de Oviedo, some of his sailors such as Miguel Cuneo and others. Through their writings, we learn how Columbus and the Europeans who came after him saw conquest, gold and god as their main purpose in the Americas and we learn how that was carried out-through enslaving the indigenous populations, the torture and murder of any who resisted, and the spread of disease. There can be no debate about what Columbus actually did-there were too many witnesses. It's a horrific picture, quite the opposite of the fairy tale history we all grew up with. Many still have trouble squaring these truths with the Columbus they grew up with even after learning what really happened.

Columbus's first voyage, landing in what is now the Bahamas, moving on to the island he named Hispaniola shared today by Haiti and the Dominican Republic and then Cuba, is very much the beginning and end of the story still taught in our schools and portrayed throughout our culture. Yes, Columbus sailed to find a short cut trade route by sea to Asia, to spread Christianity, for fame and glory, but above all else, he sailed for power and to get rich-- GOLD. According to Kirpatrick Sale's count in his standout The Conquest of Paradise, there are at least 65 references to gold in his journal. As Columbus wrote, "Gold is the most precious of all commodities; gold constitutes treasure and he who possesses it has all he needs in the world, as also the means of rescuing souls from purgatory and restoring them to the enjoyment of paradise." And Columbus's own words in his log and letters foreshadow the worst that was to come for the indigenous populations :

* His mind set, just two days after landing on October 14th, 1492 : "When your Highnesses so command, they could all be carried off to Castile or be held captive in the island itself, because with 50 men they could all be subjugated and compelled to do anything one wishes...."

* On his third day : "They would make fine servants...With fifty men we could subjugate them all and make them do whatever we want..."

* "I took some of the natives by force... It is possible..to sell all the slaves..here there are so many of these slaves... they are as good as gold"

Before leaving for Spain, Columbus kidnaped as many as 30 Tainos, "to take to the Sovereigns to learn our language so that it might be disclosed what is in the land...Afterwards I sent to a house ... and they brought back seven head of women, small and large and three children. I did this because the men would comport themselves better in Spain having women from their land than without them." (Quoted in Edward F. Stone, American Heritage, "Columbus And Genocide").

The Doctrine of Discovery, or
What's European Land Doing Under Native American Feet ?

Related Topic(s): Columbus-Christopher, Add Tags
Add to My Group(s)
Go To Commenting
The views expressed herein are the sole responsibility of the author and do not necessarily reflect those of this website or its editors.